Broncos getting fit at YMCA 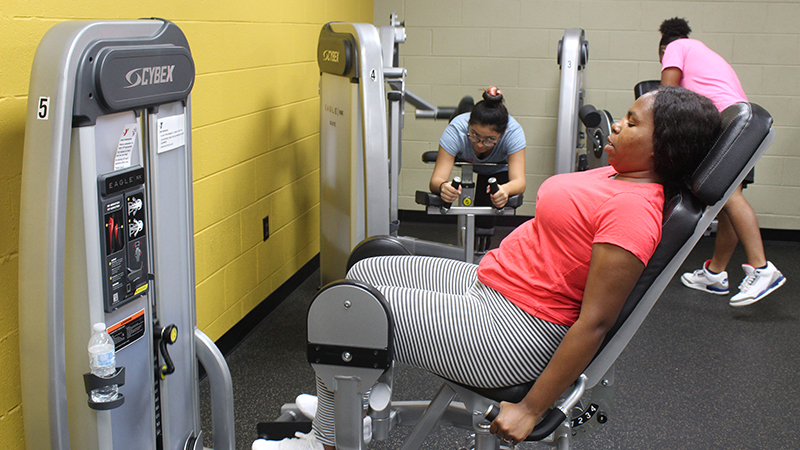 Tashera Barrett, in front, works on strengthening the lower part of her body. In back, Karina Espino exercises her legs. -- Stephen H. Cowles | Tidewater News

Denne, who said he serves on its local board, suggested the program as a way for both groups to serve one another.

“Why not get together if we can,” he said, adding that the fitness center picks up some of the costs, and a grant from the Franklin City School Foundation covers the rest. This is the second year for the school program. The numbers this semester are limited to eight students owing both to funding as well as consideration for other patrons to not overcrowd the site. But he would like to get 14 students in next semester.

In addition to learning how to use the equipment, the participants get to do kick boxing and yoga,  as well as tennis via a clinic sponsored by the Western Tidewater Tennis Association. Last year, the group then went to Virginia Beach to experience rock climbing. Denne would like for kayaking in Courtland to become a later option.

“I want them to be exposed to as much fitness variety as possible,” said the coach. “They eat it up.”

There are still classroom lessons in nutrition, anatomy and exercise physiology, and those are put into practice in the Y.

To qualify for the privilege of this advanced PE course, the students must also have been exercising their brains in obtaining good grades.

Routines vary from student to student. Fitness director Christine White might show how to work on a body part such as the legs one day, and then the upper body the next, and so on.

On the day of the interview, junior Tashera Barrett was working on strengthening her legs. Nearby, fellow junior and first-year participant Karine Espino focused her attention on a different equipment.

“I want to get stronger,” she said. “I really like this clinic.”

Around the corner in the free weight room, Kamond Rogers was pushing weights with his legs. Strengthening both the lower and upper body parts are important to this football player.

Jeremiah Hicks is aiming for what he said is called the “Dorito look,” perhaps known better as a triangular shape — broad shoulders and narrow waist.

Christopher Owens, a senior among the trio, said his goal is “to get muscles.”