CAPRON — Wallace Emerson Burgess, 88, went to be with his Lord on Sept. 18, 2018. He passed away in his home surrounded by his family. 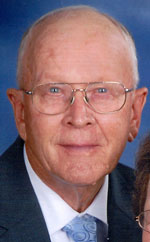 He was a 1947 graduate of Courtland High School and an Army veteran of the Korean War, serving in the 45th Infantry Division, and was a member of the Honor Guard for the 8th Army Headquarters in Seoul.

Emerson was a retired livestock manager for the Virginia Department of Corrections, and a member of Vincent’s Grove United Methodist Church where he served as lay leader for many years.

Emerson was a faithful servant of his Lord and will be deeply missed by his family and friends. The family expresses sincere appreciation to Fannie Barnes, Loretta Surace, and his hospice team of Ann Matthews and Candace Pride for their loving care of Emerson.

The family will receive friends on Thursday from 6 to 8 p.m. in Wright Funeral Home, Franklin, and requests in lieu of flowers, memorial donations be made to Vincent’s Grove United Methodist Church, c/o Randy Burgess, 23359 Hanging Tree Road, Courtland, VA 23837.