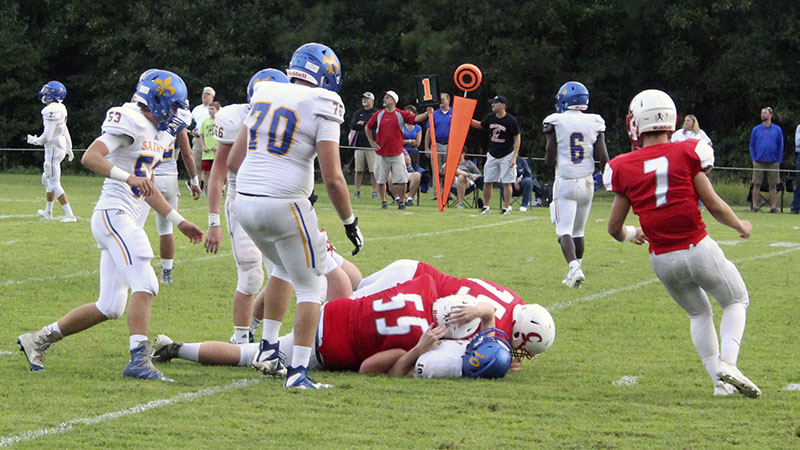 An Isle of Wight Academy Charger tackles a Nansemond-Suffolk Academy Saint during play.

IWA was paced by senior running back Hunter Edwards’ 146 rushing yards, including a touchdown.

The Chargers had hoped to avenge last year’s heartbreaking 35-34 loss to N-SA, which saw the Saints score 21 unanswered points in the third and fourth quarters in the first meeting between the squads since the 1990s. What they got Monday was disappointment of another order.

N-SA raced ahead to a 21-0 lead before IWA dented the scoreboard on Edwards’ 20-yard scamper in the third quarter.

The Chargers were plagued by turnovers in the game, losing two fumbles and tossing a trio of interceptions. Those miscues led to 21 N-SA points.

Nansemond-Suffolk’s Zac Morris was a receiving threat for his team, catching 4 passes — 3 of those for touchdowns — for 140 yards.

The Chargers square off against Blessed Sacrament-Huguenot this Friday in Powhatan. It will be their second contest in five days, thanks to the postponement of last Friday’s tilt against N-SA due to effects from Hurricane Florence.