Steamin’ on the Blackwater 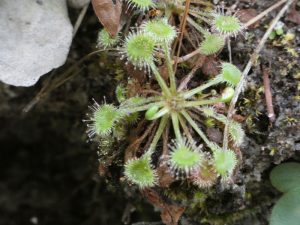 A Sundew plant was found on the Blackwater. Sundews are only about as big as a half dollar, and belong to a species of carnivorous plants. — Jeff Turner, RiverGuard

Spirit of Moonpie and I spent the 5th through the 7th on the Blackwater below Franklin. The water was HOT at 79 degrees. Air temps were HOT from 77 to 94 degrees with the humidity as bad as I have ever seen it. I felt like I was literally steamin’ in my own juices … like a big ol’ crawdad … sorry for that visual screenshot. Seriously, if I had not had a 12volt fan with me I think I would not have endured the patrol.

The trash on this trip was not bad, I only picked up about a half a bag. Can’t attribute that to the new trash catching boom in the city Bogart pond though as we have not had very much rain. Unfortunately, I think that’s about to change next week.

Moonpie Critter patrol was lax due to the really hot weather. I did get to interact with a juvenile beaver the second afternoon. I had pulled the boat up to this huge beaver gnaw log and soon after the little aquatic rodents were circling the boat. They were not very happy I was there and swam around the boat slapping their tails and making little funny beaver noises the whole time I was there. Moonpie said she was going to start slapping her tail like that when I made her mad. I told her I thought that might not be a good idea being as old as she is it might would break off! With that comment she got mad and tried to slap her tail … it didn’t work as I predicted.

The fishing on this trip was not too bad; at least I didn’t get skunked at night with the catfish. I did only catch one though the first night. It weighed right at 13 pounds and gave me a pretty good fight. The bream and bass fishing was pretty good. I caught some nice bream on a tiny diver lure fishing it as topwater and several small bass on a broken back Rapala.

I photographed some interesting plants this trip. Maybe some of ya’ll can help me identify what they are by looking at them on the Blackwater Nottoway RiverGuard Facebook page. I think some are a type of fungus or mushroom that grow on the face of a straight bluff and kinda grow out of a hole. Really strange looking. Oh, I also got to eat my favorite river snack on this run. .. yummy bulaces. Mmmm, they were delicious!

Well, looks like this might be the last report for a little while. I got to have some minor surgery and then I think we are going to have hurricane issues. I am praying very hard that we do not get like 15 inches of rain. I sure would hate to see the two rivers we call the Blackwater and Nottoway do a 1999 repeat performance.

To contact Jeff Turner about river issues, email him at blknotkpr@earthlink.net.