CHESAPEAKE — Nancy Vick Shackelford passed away on Aug. 31, 2018, in Chesapeake, Virginia, after a courageous battle with cancer. 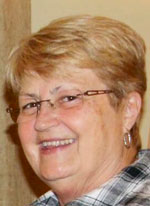 Nancy graduated high school in 1969 from Terry Parker High School in Jacksonville, Florida. She attended University of Central Florida and Jones College, where she completed coursework in general business.

She began her career working for the State of Florida, and relocated to Franklin in 1985, where she began working in the Lumber division at Union Camp (now International Paper). It was there that she met her beloved Lee. After they married in 1992, Lee’s job took them to various cities in the Southeast, from Savannah to Memphis, Pensacola, Montgomery and even a few years back in Franklin. While they established lasting friendships everywhere they moved, Nancy truly enjoyed the time back in Franklin where she was close to family and lifelong friends.

Nancy recently retired in the Outer Banks. She was passionate about interior design, the beach and spending time with her grandchildren, family and friends.

Nancy was a former member of Franklin Baptist Church.

Nancy is survived by her daughter, Jennifer Smith Carlson and her husband, Keith; and her beloved grandchildren Jack, Ben and Caroline in Denver, Colorado; her brother, Billy Vick and his wife, Joyce in Holland, Virginia; her brother-in-law, Bruce Shackelford of Greenville, North Carolina; and many wonderful cousins, nieces, nephews and dear friends.

The memorial service will be in Franklin on Tuesday, Oct. 9, in Franklin Baptist Church at 7 p.m., with a reception to follow in the Fellowship Hall.

In lieu of flowers, the family has requested donations be made in her memory to the American Cancer Society or Franklin Baptist Church.