Even catfish go on vacation 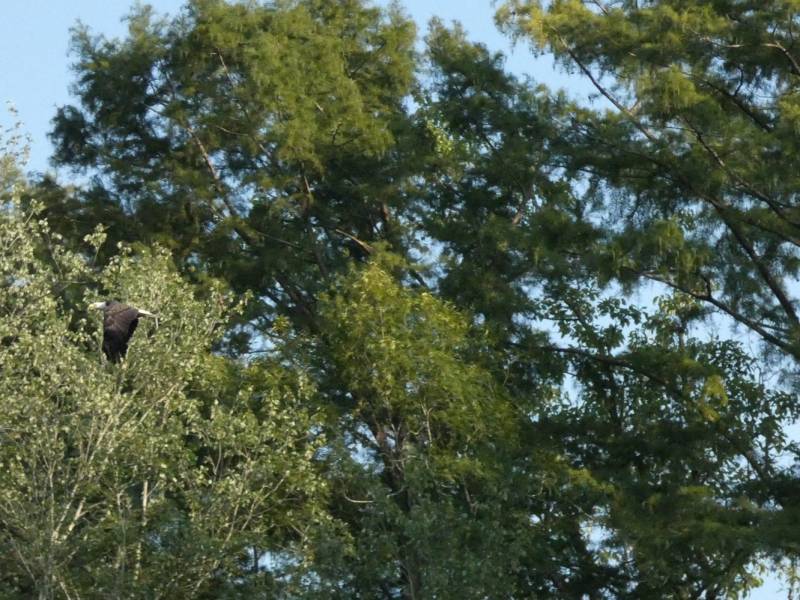 Spirit of Moonpie and I spent the 28th through the 30th on the Nottoway below Delaware. The water was as hot as I have seen in awhile at 80.2 degrees. Air temps ranged from 77 to a terribly hot 96 degrees with the heat index at 110. It was HOT!

Trash on this trip was very light. I did pick up a patch of stuff just downriver from the Bronco Club that included two 5-gallon buckets and some beer bottles all in the same little hole. Very odd. I also removed five untagged limb lines that were hanging in the first curve upriver from the Rt. 258 boat ramp. 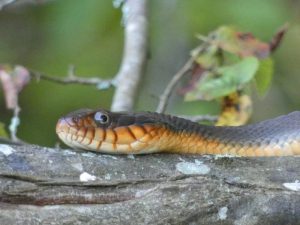 This orange belly watersnake seems pleased with the hot weather of late.

On the other end of the river patrol up near the boat landing at Delaware, I removed a bunch of yellow survey tape from the trees that had been used to mark someone’s limb lines. It’s okay to use that stuff, just be sure when you remove the lines you remove your markers. To not do so is a littering offense.

The Moonpie Critter Patrol was slack again this outing. Just too darn hot I guess even for critters. We did see a bald eagle and two white egrets, and a few beavers, but that’s about it. The heat didn’t seem to bother the snakes too bad. I saw a few, including a very pretty orange belly and a nice fat cottonmouth.

Some regulation stuff to mention. Most of the piers at VDGIF boat ramps are being posted with NO Fishing signs. I talked to a VDGIF rep and he stated that the reason is liability issues. Sadly, there have been several drownings this year off of state ramp piers, so that’s what prompted that move.

In my opinion it’s a good move, I have never thought fishing from ramp piers should be allowed.

The piers were built to facilitate the launching and retrieval of boats, and I have seen many conflicts over the years between boaters and people fishing from the piers. Also the crazy mile-long No Wake Zone that began at Checkerboard corner and ran all the way past Edwards Seine Beach has now been removed. I am so pleased at that. However, as I suggested to Southampton County in a report I wrote last year, I believe a No Wake Zone should have remained in that blind sharp curve at Checkerboard Corner for safety reasons. So I just want that known for public record.

The fishing on this trip … well it was good on fly rod and casting. I caught plenty of nice bream and even caught some small bass casting and on fly rod. However, the cat-fishing was dismal. I had primo bait, primo positions and I even ran two rods both nights … SKUNKED both nights! Now getting skunked two nights in a row is something that rarely happens to me. So, I don’t know what to think about that. In my defense I will say that the VDGIF shock boat was on the river last week and they got skunked one day … so just sayin! I guess even catfish go on vacation every once in awhile.

Well, by the time this report goes to print it will be September. I’m looking forward to the change in seasons, little cooler days and nights. I love it when it gets that feeling in the air. I can’t really describe it, but it’s like something crisp and exciting feeling, the sun looks a different the way it shines on the trees, the smell of corn fields being picked followed by the dirt smell of peanuts being dug and the sound of squirrels cutting nuts. I’m not trying to make life rush past, I just get excited from memories past on the two rivers we call the Nottoway and Blackwater.