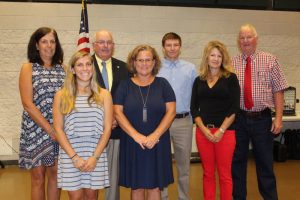 The Southampton County Farm Bureau presented scholarships from both the Women’s Committee and local agency. At left are Brittany Cobb and her mother, Cynthia; Marguerite and Gary Cross, representing their daughter, Taylor; Lee Johnson with his mother, Jennifer; and Michael Drake, a bureau director. Not present was Hannah Reedy. All the students are 2018 graduates of Southampton High School. — Stephen H. Cowles | Tidewater News

Michael Drake, one of 12 board directors, presented the proposals to those members who attended.

One: We support cleaning and re-establishing outfall ditches to help address the deterioration of our road’s structural integrity and improve public safety.

Two: We support strengthening the “Right to Farm” law to better protect nuisance complaints against producers.

In earlier businesses that evening, John M. Drewry gave a report on the insurance facet of the bureau, noting that financially in 2017, there was a surplus of money to pay future claims. Further, the bureau rating is now graded at A-, which he said was “quite an accomplishment for us.”

Drewry said the farm bureau alliance continues to grow, and encouraged members to “invest time” with their agents. He urged people to attend the State Fair, which will be from Sept. 28 through Oct. 7. Gary Cross was commended for his service as bureau president.

“We need people like that to speak up,” Drewry said of Cross.

Clay Francis, stepping in for district field services representative Daryl Butler, pointed out that membership numbers are trending upward, with 191 ahead from last year.

Also giving positive news were Marguerite Cross and Renita Snyder of the Women’s Committee, who said the group has had “a pretty good year overall.” They referenced a recent women’s meeting, describing it as “very empowering,” and are also looking this fall to organize an estate planning workshop this winter.

Snyder made the presentation of $250 scholarships each to four Southampton High School 2018 graduates. She said there had been many applicants, and the question was asked — and answered —as to whether or not to reward the four final choices. The following are studying in majors pertaining to agriculture-related careers.

• Lee Johnson, son of Dan and Jennifer Johnson, is attending PDCCC, and will later transfer to Virginia Tech.

• Hannah Reedy, daughter of David and Michele Reedy, is studying at Wake Technical Community College, and will later transfer to NCSU.

The bureau’s board of directors, represented by Michael Drake, also presented scholarships. Though only two are usually given, this year the agreement was that all of the aforementioned students should also be supported, each with $1,000. The money has already been sent to their respective schools.