COURTLAND
On Wednesday, Aug. 15, 1973, the Peanut Patch first opened downtown in Courtland. Forty-five years to the day this past Wednesday, the staff celebrated a flavorful anniversary, complete with ice cream and lemonade. 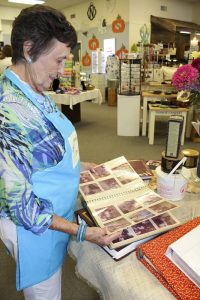 Judy Riddick looks through one of the scrapbooks about the Peanut Patch’s early days. The store celebrated its 45th anniversary on Wednesday. — Stephen Cowles | Tidewater News

There to greet and assist both familiar and new customers was Judy Riddick, one of the four original business founders.

“I still come to work every day,” she said, wearing a sky-blue apron that simply states the shop’s beginning year.

Judy, her husband, Bob; his brother, Bill and his wife, Gaynelle, had created the place as a way to make extra money. They had found the site across from the post office. Originally, the business was used just for stripping furniture, no easy task. The Riddicks also saw an opportunity to sell peanuts, one of the products that has put Southampton County on the agricultural map.

The gift shop portion, which first relied on consignments, sold peanuts that were cooked and packaged elsewhere. Seven years later, the couples decided they could do their own preparation of the snack.

With the creation of the Route 58 bypass, the traffic that the Riddicks depended on was diverted. In March 1994, the decision was made to relocate the business to its present facility on Southampton Parkway (Route 58.)

“I was very nervous about moving,” said Judy Riddick. She added that location was formerly the Waverly Shop, a furniture store. Initially, an agreement was made to rent for a year. Ultimately, the decision proved fruitful.

“It was a great move for us,” she added.

At one point in its history, Bob and Judy bought Bill and Gaynelle’s share of the business.

Over the years various vendors have supplied the gift items right alongside the large array of peanuts. The preparation of the snack was moved to a place in the Agri-Business Park down the road.

Bob and Judy’s children came back to the area in 2000 and got involved in the business.

The product expansion — which reaches both national and international customers — warranted a branding, and became known as Feridies. That comes from parts of the family’s last names: Alice and Ted ShafFER, Bob and Judy RIDdick, Ted and Jane FrIES.

To learn more, visit www.feridies.com or, better still, come by the store at 27478 Southampton Parkway.