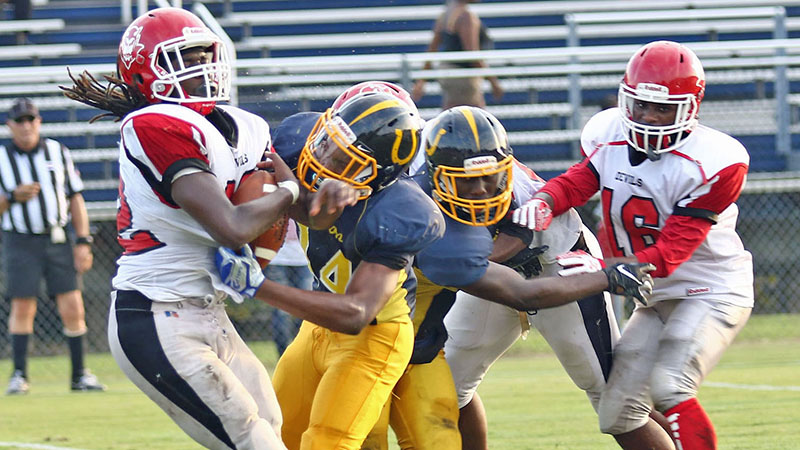 Defense tries to strip the ball from a Devil runner.

FRANKLIN
The Franklin community was able to get a look at the 2018 Franklin High School Broncos as they held a scrimmage game against the Lancaster High School Red Devils on Thursday at Armory Drive Football Stadium.

Because of the earliness of the season, neither team had a roster to identify the players.

The Broncos this season are under the leadership of a new coach, Karl Robertson.

In comments after the game, he said, “I thought we came out and showed good effort, first and foremost. We played collective and didn’t let the elements get to us; it was hot out here. But at the same time we tried to make a conscious effort to get the job done.

The kids stayed together and played hard, we coached hard even though it was tenuous. We tried to coach them like it was a game; we need that kind of work. We got in as many guys that we could, and looking forward to see if that will take us to some further places this year. It was a blessing. We are just climbing right now.”

In a review of the game, on the Broncos’ first possession they opened with a running game, but when faced with third down they went to the air and connected with a pass for their first down of the game.

After moving the ball deep in Red Devil territory they turned the ball over on downs. On defense they forced a punt to get the ball again, but on this possession they fumbled.

As the Red Devils took to offense, the Broncos picked off an interception that resulted in their first touchdown on a two-yard run.

A successful 2-point conversion gave the home team an 8-0 lead. The Broncos continued the game with strong defense and showed their offensive power. By the end of the first half, the home team was up 22-0.

In the second half the Broncos continued with strong defense and offensive power. The Red Devils scored late in the game in the fourth quarter, but it was too little to late as the final buzzer sounded to end the game with the Broncos up 42-8.

To sum it up, for their first outing of the end season under new leadership with Coach Robertson, overall the Broncos looked good on both defense and offense.

During the entire game the Broncos did not have to punt, so their punting game remains to be seen.

The Broncos will be on the road next Friday, Aug. 24, against Cumberland at 7 p.m. 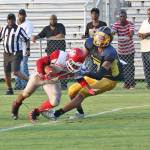 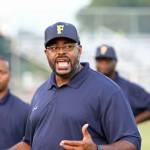 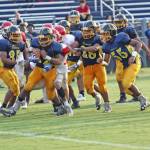 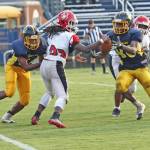 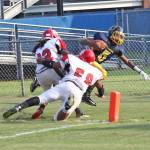 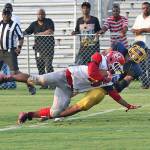