RICHMOND
Vonda K. Sessoms was recently sworn in as the first African-American female director of the Robert A. Hill Sr. Fraternal Order of Police Lodge No. 56 on July 27 in Richmond. The lodge is located in Courtland.

She joined that organization in 2011. 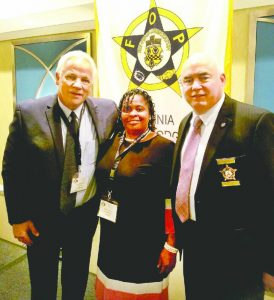 Sessoms is employed as a probation and parole officer in Franklin. She has been employed for over 23 years with the Virginia Department of Corrections, including positions as a corrections officer for Greensville Correctional Center, Southampton Detention/Diversion Center, and Deerfield Correctional Center.

In her spare time, Sessoms is an active participant in the community. She is a volunteer for the American Red Cross, and assists with the City of Franklin/Southampton County Food Bank.

Sessoms has also been a member of the Tidewater Chapter of the National Association of Blacks in Criminal Justice since 2012.

She is the daughter of Loretta S. Jones of Ahoskie, North Carolina, and Earl Slade Jr. of Hampton.