FRANKLIN
Seth Konkel, a general studies major at Paul D. Camp Community College, has been selected to be part of the eighth class of the Valley Proteins Fellows Program. 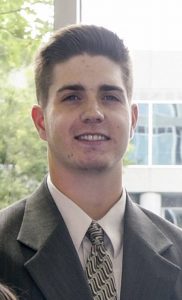 Seth Konkel spoke during a recent orientation held in Richmond for all of the recipients of the 2018 Valley Proteins Fellows Program. — Submitted | Wendy Harrison

“This award will provide Seth with great opportunities,” said PDCCC President Dr. Dan Lufkin. “We are proud to have him join the ranks of the other past PDCCC recipients.”

Graduating from Mighty Warriors Homeschool with a 3.7 grade point average, Konkel is an Eagle Scout who has been active in the community for his nearly seven-year affiliation with the Boy Scouts of America.

Konkel was recruited as a pitcher for the college’s inaugural baseball team, the PDC Hurricanes. He was also selected as PDCCC’s Herbert W. DeGroft Commonwealth Legacy Scholar (CLS) for 2017-18.

As a result, he is in the position to mentor other CLS recipients and participate in statewide events, such as the Student Leadership Conference. Although he has already been accepted to Lee University, he may apply other places as well. His goal is to earn a bachelor’s degree in Health Sciences.

“I want to pursue a career in becoming a sports physical therapist,” he said. “I also want to continue to work hard at baseball and try to get drafted into the MLB.

Of the nearly 250,000 people served by Virginia’s Community Colleges across the commonwealth each year, only 10 are selected for the Valley Proteins Fellows Program. In addition to financial support, the program provides recipients with mentoring, coaching, networking and leadership opportunities.

This marks the eighth consecutive year that Winchester-based Valley Proteins Inc. has funded the Fellows Program, which was designed to help high-achieving second-year students complete college.

“Valley Proteins is privileged to invest in the future of some of Virginia’s most outstanding students,” said President Gerald F. “J.J.” Smith Jr. “Helping to remove some of the obstacles that can hinder their success is a priority for us, and it reflects our commitment and support for the community college mission overall.”

The Virginia Foundation for Community College Education (VFCCE,) which supports all 23 of Virginia’s Community Colleges, oversees the Valley Proteins Fellows Program. Because of its nearly 100 percent completion rate, the VFCCE has established and implemented three similar scholarship programs to support students.