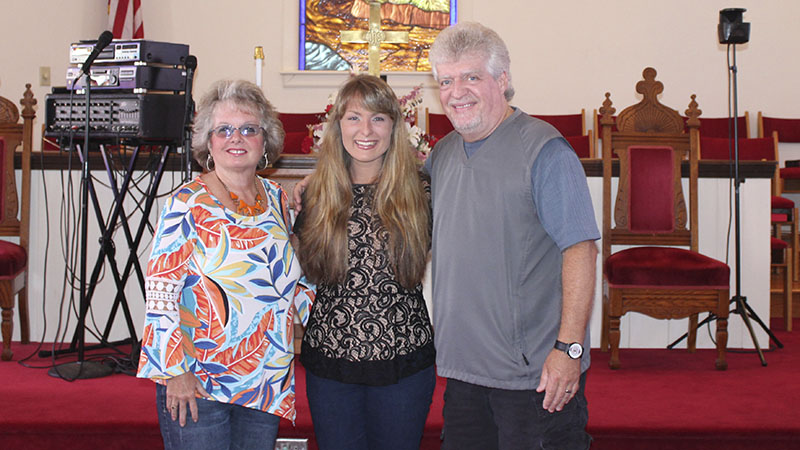 FRANKLIN
The Rev. Jeff Gibson recalls first hearing the word “Tidewater” as a child when he would attend minor league baseball games — where the Tides would play the home team in his hometown of Charleston, West Virginia. Now, after relocating to Franklin in early July to become Hunterdale Christian Church’s new interim pastor, the Tidewater region has become his new home.

“Now I know where that area is,” Gibson said. “I had no idea when they [Hunterdale’s selection committee] contacted me. I had no idea what this area was like.”

Gibson, an ordained Southern Baptist minister, had most recently been serving as interim pastor of Shankey Branch First Church of God in the small city of Celina, Tennessee. He also has experience doing missionary work in the Cayman Islands.

Gibson said that he felt it was time to make a change for his family, which is why he chose to accept the offer at Hunterdale Christian and relocate to Franklin.

“This just seemed to be the right fit for us,” he said. “This is a really nice area. It’s one of the prettiest communities of its size I’ve seen anywhere. It kind of has the look, the presence, of a bigger city but it’s got that small-town charm.”

Gibson added that the presence of Paul D. Camp Community College only about two miles from the church and parsonage was an added bonus to relocating. His daughter, Whitney, 20, will start classes there soon.

“He really is down-to-earth, easy to talk to,” said Robin Ellis, a member of the selection committee. “That church has been there for over 100 years, and I’ve attended there since I was born. As far as I’m concerned, he’s a perfect fit.”

She added that the selection committee had been impressed not only with Gibson’s experience as a pastor, but also his and his family’s musical abilities. He has produced around 10 recordings, some of which included songs he had written himself.

Gibson described his musical style as a combination of old hymns, Southern Gospel, inspirational and light contemporary. His daughter will also occasionally perform in church.

When asked about his goals for Hunterdale Christian, Gibson said his main goal was to help the congregation be revived in purpose and in numbers.

Ellis explained that the church had lost some of its membership over the past few years, but added that since Gibson had stepped in as pastor, attendance has begun to increase.

“I really want to try to be a servant leader not only to this church but also to the community,” Gibson said.