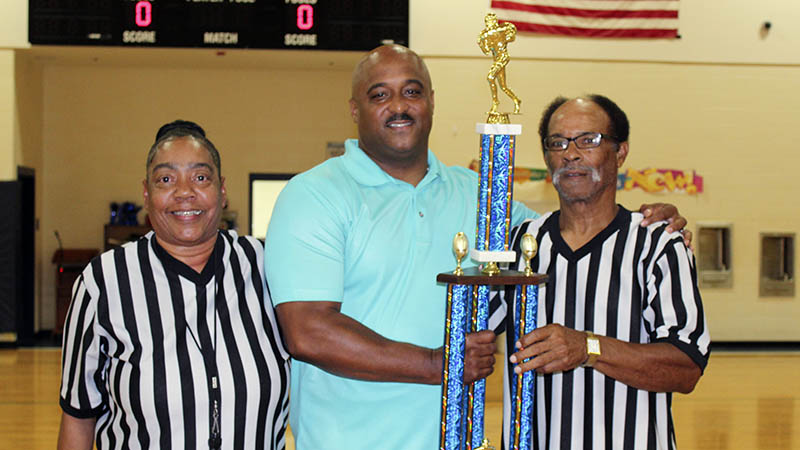 Darren Parker, center, receives a trophy of appreciation from Carolyn and Waverly Lawence. The couple made the presentation to thank Parker for his many years of serving as the football coach for Franklin High School.

FRANKLIN
For Darren Parker’s many years of dedication to coaching Franklin High School football, his friends Waverly and Carolyn Lawrence honored him with a trophy of appreciation. The brief ceremony took place on Tuesday evening at the gymnasium in J.P. King Jr. Middle School. That is where Parker is now principal.

The Lawrences were already there to coach intramural basketball games with students from both J.P. King and S.P. Morton Elementary schools. She oversees health and physical education at the former.

Parker was there to watch the activities, seemingly unaware of what the Lawrences had in store. But he must have sensed something was going on when members of the Broncos showed up with their new coach, Karl Robertson. Parker went over to shake everyone’s hands.

“Wow!” was his reaction when called up before everyone in the gym.

After thanking them, Parker turned the attention to the couple.

“Nobody has changed more lives than Mr. and Mrs. Lawrence,” he said, adding that she was his mentor when he first arrived 22 years ago.

Parker thanked his wife, Weynette, for her support, calling her “a blessing,” and pointed out their child, Darren Parker Jr.

The principal’s new responsibility precludes him from continued coaching, so that has been handed over to Robertson. Parker said he would help the coach and team whenever and wherever possible. 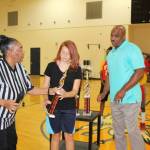 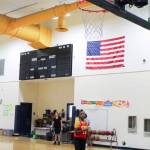 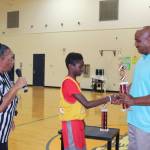 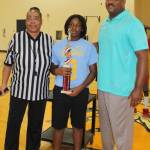 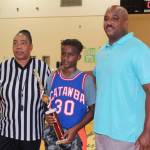 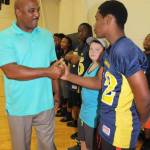