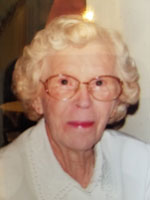 Mrs. Horton was born on Sept. 3, 1922, in Sebrell, Virginia, to the late William B. Simmons Jr. and Hylah Camp Simmons.

She was instrumental in the original beginnings of the Chrismon Tree at the church.

Mrs. Horton was also instrumental in the formation of Princeton Community Hospital Volunteers and was active in the program for more than 40 years.

She was an avid golfer at Princeton Elks and Fincastle country clubs.

From 1983 to 2013, Margaret and Ed enjoyed wintering in Florida. She also enjoyed traveling with her husband when he worked for the Dean Company. She had been a resident of Princeton since 1966, moving here from Portsmouth, Virginia.

In addition to her parents, she was preceded in death by her husband, Edward V. Horton; one son, Edward V. Horton Jr.; one daughter, Hylah Horton Lohr; one brother, William B. Simmons III; and one sister, Mary Sue Goodrich.

The funeral to celebrate the life of Mrs. Horton was on Saturday, Aug. 4, at the First United Methodist Church in Princeton with the Rev. Gerald Roberts officiating. Burial followed at Roselawn Memorial Gardens in Princeton.

Online condolences may be made by visiting www.seaverfuneralservice.com.