FRANKLIN
At 93, Leon Deshields has had decades to think back on his life, particularly those nine years when he was in service for the country. This past spring, he went to Bedford for its National D-Day ceremony on Memorial Day. There, his name was inscribed in a brick along with dozens of other people who served their country. Earlier this week, the Franklin resident spoke about that time after his workout at the YMCA. 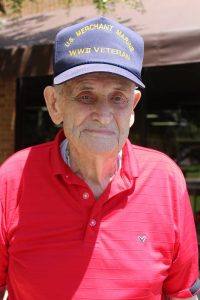 Leon Deshields, 93, first served his country as a Merchant Marine, later in the Army. He’ll be 94 this fall. — Stephen Cowles | Tidewater News

Deshields recalled that he was 17 in 1942 and had decided to volunteer for the Merchant Marine. That seemed at the time a somewhat safer alternative. After all, they weren’t in the thick of battles.

“I didn’t see the point of getting shot by Hitler,” he said.

The website for the organization, www.usmm.org, explains that Merchant Marine refers to a fleet of ships that carries and delivers supplies to troops during war, or does imports and exports in peacetime. Although the word marine is in the title, the seamen are not to be referred to as those belonging to that branch of service. Instead, they are known as mariners.

Technically civilians, seamen such as Deshields never were engaged in direct combat, but the work was not without risks.

Their cargo was most valuable. As the expression goes, an army marches on its stomach.

The mariner said the ship in which he traveled was part of a convoy, protected by Navy ships.

One time, Deshields and crew went through the Straits of Gibraltar and they experienced enemy torpedoes. Actually, the boats ahead caught the fire.

“I didn’t appreciate it, but I wasn’t afraid,” said Deshields.

Another example of important cargo was bringing 800 prisoners stateside. Travels also took him to delivering gasoline in southern France as well as through the Panama Canal, Australia and San Francisco.

In the fourth year, his service went from civilian to military when he was late getting to a ship, which made him eligible for drafting. That’s how the Army got ahold of Deshields and put him to work for that branch of service, and became an engineer.

“I often wondered what would have happened if I had stayed on,” he said, adding that he applied for officers’ training, but that school had closed.

Five years later, he was a civilian again. Deshields said he first took classes through the Old Dominion division of William and Mary in Norfolk, where he majored in chemistry. At one time Deshields thought about being a lawyer, instead he went on to becoming a salesman for the Southern Biscuit Company in Richmond. Later, he operated a restaurant and motel, and for 15 years worked as an insurance saleman for Allstate.

Along the way, Deshields met the woman who would become his wife, Myrtice Wendell. They met at Hopewell Christian Church. Their children are Welton Deshields of Franklin and Donna Adams of Smithfield.

He treasures the years that he and Myrtice were together — she died about 12 years ago.

“I had a very good wife,” Deshields remembered.

“I’ve had an excellent life … a very good life.”