Spirit of Moonpie and I spent the 26th through the 28th on the Blackwater below Franklin. The water was high, clear and 76.5 degrees. Air temps ranged from 71 to 91 degrees and it was muggy to the max. 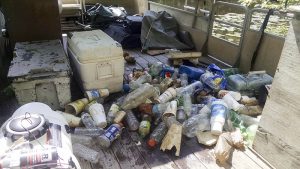 The fishing on this trip was not so great. I caught only two catfish the first night, the largest going 10 pounds. The second night was, well, a wash we will say. I fished for MILES both days trying to catch bait. I barely accomplished that; I did accomplish adding two years to the demise of my casting shoulder though. There was just so much freshwater in the river from the millions of gallons of runoff the river received that week. The result was that the fish were just not interested in participating this 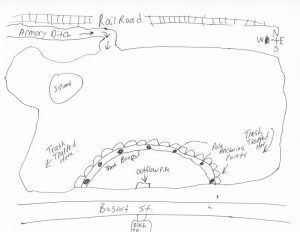 This drawing by the RiverGuard illustrates the trash boom that will be deployed in the Bogart retention pond. He is hopeul that will greatly reduce the amount of garbage that has been making its way along the Blackwater River.

round. It looks like that trend will continue for some time.

Because of all the heavy rain I fully expected the river to be trashed … and it was. The amount of trash in the river was stunning. I picked up three bags worth and that didn’t come close to getting all of it. Most of this load was plastic bottles. Over the past 18 years of cleaning up the rivers, I have seen the amount of glass floatables steadily decline. The reason is, of course, not as much glass is used now and the fact that a lot of the glass I was getting had been in the system working its way toward the river for years. It seems that the glass influx is now on the decline, which is good as that makes a heavy trash bag full. Luckily, the city is working toward getting that expensive trash catching boom installed in the Bogart retention pond, which will really cut down on trash going into the river.

Well, I rolled the dice on this trip. The forecast was for a chance of storms each day, albeit a less chance than it had been being. So I decided to go anyway mostly ‘cause I knew there was lots of trash needed picking up. It was a decision by Friday afternoon I would come to regret. By 6, I had already seen storms popping up on the radar so I headed upriver back toward Franklin and the bridge that would soon be my home for the next 12 hours. At 7 p.m., I arrived at the bridge and spent the next 30 minutes trying to anchor midway under the bridge. That in itself was a challenge because the river was running very fast there.

No sooner than I got secured … the deluge began. And it rained and then rained harder and then the lightning and thunder kicked in. I have been in a many a storm over the past decades on the river, few rivaled this one in number of lightning strikes. I thought at one point a tornado was coming. The wind picked up suddenly coming from the East across the wood yard with such a fury that chunks of bark mixed with dirt and other debris were zinging across the river right in front of me, the bridge luckily shielding me from that torrent of projectiles. I just sat there running from front to back of the boat to escape the rain/mist blowing from the cannon-like rain downspouts draining the roadbed above me.

As bad as all that was, it was only to get worse. I’m not sure what time it was ‘cause after it happened I kinda was disoriented for about 30 minutes. I had just laid all the rods down flat in the boat so as not to create any lightning rods, no pun intended. I was turned toward the mill heading toward the rod racks when there was a supernova-like flash off in front of me. Before I could even drop the rods and even engage the process of nerves firing and tissue and muscle responding to get my hands to my ears, the thunderclap hit. The concussion nearly knocked me down and I could not hear from the loud ringing in my ears. I stumbled backward into the captain’s chair checking my ears, as I was sure they were bleeding. They were not, and after a few minutes my ears stopped ringing. It looked to me like one of those smokestacks at the mill had taken a direct strike. I believe they have lightning arrestors on those stacks, regardless what the lightning hit over there, it was horrendous.

After that the storms just kept coming; I think it was like three different cells bombed me that night. It finally subsided some later that night and gave me a chance to move the boat closer to shore under the bridge where I could better get both anchors secured. I settled into my tent that night hoping for a bit of rest only to be awaken at like 4 a.m. (three hours later) by another storm cell and torrential rain. I just lay there thinking how much trouble I was going to encounter trying to get home, and kinda drifted back into a hellish tormented dream state accented with thunder and the now drone and boom of early morning bridge traffic. It was starting to get light and I looked out from behind the sanctuary of my bug netting and to my horror then saw my next threat. The ceiling of the bridge was now noticeably closer to the roof of the boat than when I had got in the tent. I had a horrible premonition of the boat getting smushed up under the bridge and getting stuck then slowly being pushed underwater. And with that thought I was up, fired that mutha up and vamoosed out of there.

So I’d like to think maybe I have learned a lesson from this trip and will not go to the river next time when the chance of storms is that high. That lesson will probably last only as long as I am able to go to the river on a regular basis for my fix. Regardless, I’m really not interested in seeing the lights fandango again anytime soon on EITHER of the two rivers we call the Blackwater and Nottoway.

To contact Jeff about river issues email him at blknotkpr@earthlink.net