ATLANTA
Paul D. Camp Community College student Alyssa Felgentreu of Zuni recently presented research at the annual meeting of the American Society for Microbiology (ASM) adjacent to the CNN World Headquarters at the Georgia Congress Convention Center in Atlanta. She represented approximately 40 PDCCC students with the results of her study, “Plant Nodes Inhibit Spread of Infection,” which was one of 4,000 chosen to be presented during the five-day event. 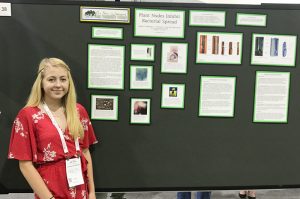 Alyssa Felgentreu of Zuni presents research at the annual meeting of the American Society for Microbiology—the largest basic science society in the world, according to PDCCC Professor Dr. Carl Vermeulen. — Submitted | Wendy Harrison

“To give the flavor of this little corner of the meeting’s section on plant-bacterial interactions, neighboring presentations were from Bolivia, Germany and Virginia Tech,” said PDCCC Professor Dr. Carl W. Vermeulen. He also noted that the ASM is the largest basic science society in the world. “In general, it is rare that undergraduates are seen at this level, to say nothing of those from a two-year junior college.”

Vermeulen, or Dr. V, as he is fondly called by students, revealed that the project began two years ago when some other students set out to study the size of capillaries in plants. “By serendipity, they discovered something much more important—that there existed a means for the plant to filter out bacteria, and thus plants have a means for preventing the spread of infection,” he said.

According to Vermeulen, a breakthrough came after it was discovered that watercolor paint could be used to demonstrate this process. Dyes would not work as they would have quickly been pulled through the plant and would have colored the petals, but microscopic paint particles were another matter. They would remain blocked at the points where branches or leaves burgeon from the stems, called the nodes.

Felgentreu explained, “To our knowledge, this is the first time anyone has reported on a mechanism with which plants can impede the spread of infection. This is thus basic to the billion-dollar agricultural industry.”

Vermeulen noted that identifying research topics is not all that difficult due to the abundance of information that was discovered so long ago. All of the results that were presented as fact can be re-evaluated using improved methods of discovery, since they are always changing and improving.

“For example, we are now hot on the trail of what powers the movement of sap in plants,” he said. “It was long thought that it was due to capillary action and transpiration, but now that is all out the window.

“Ask an underwater plant how it transpires when it cannot evaporate any water. That alone ought to tell you that something is wrong with the old ideas.”

He also added that students should recognize that plants share a lot of similarities with animals, among them are the same basic metabolism and the same genetic mechanisms. “A study of plants, furthermore, doesn’t require all manner of approvals from research ethics committees. This may help area schools that implement project-based learning when choosing research topics,” he said.

Dr. Vermeulen has provided many students the opportunity to present at the annual microbiology meeting in the past.

He hinted of another project in the works—one that is “out of this world” and has “important implications for agriculture on Mars,” he said with excitement.