FRANKLIN
Students and parents of S.P. Morton Elementary School will get their first opportunity to meet their new principal, Phil Griffin, when he hosts four meet-and-greet sessions on Monday, Aug. 6. 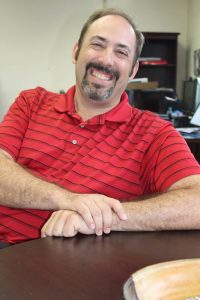 Phil Griffin has good reason to smile because he is the new principal at S.P. Morton Elementary School. He brings 20 years of experience in teaching and principalship. — Stephen H. Cowles | Tidewater News

Speaking earlier this week to the newspaper, Griffin said those people who are unable to attend any of the meetings are welcome to contact him by calling 562-5458 or dropping by the school before September.

Most recently from Williamsburg, Griffin is bringing 20 years of experience in teaching and principalship. Before education became his mission, the Worcester, Massachusetts native was considering a career in political science.

The course change occurred when he saw his younger brother’s schoolwork, which was from the same teacher he had years before, and it was the exact same thing he had then.

“I can do better,” Griffin recalled saying at the time. So he changed his major to elementary education,  going on to teach all subjects for fourth and fifth graders.

While in the fifth year of teaching, the principal at the time asked Griffin to take on more responsibilities of an administrative nature. He was also later encouraged to expand by becoming such a school leader. He became a resource teacher in Henrico County, and an assistant principal in Petersburg and Williamsburg. The first position as principal was at Natural Bridge Elementary School in Rockbridge County.

The biggest challenge as a principal is practicing the art of communication. “You are the face of the [school] building and you have to communicate clearly, effectively and efficiently,” Griffin said, adding with a laugh. “It takes a little bit of practice.”

His path to this city came about through Wayne Carter of Franklin High School. They were running a 10-miler, met and got to talking — they had already known each other through a previous cohort. Carter suggested Griffin put his name in for future consideration in the school system, and — voila! the opportunity presented itself this year.

“I absolutely want to be visible to the students, staff, parents and community. I hope to bring some consistency,” Griffin said, adding he intends to be here on a long-term basis.

Asked if he had a particular philosophy, Griffin said, “We’re a family here [at S.P. Morton] and we will raise each other up. We can do more together. To go fast, you go alone, but to go farther, go together.”