COURTLAND
The board of directors of Mahone’s Tavern and Museum Inc. announces that St. Luke’s Episcopal Church has been chosen to be the replica for its third commemorative ornament this year. 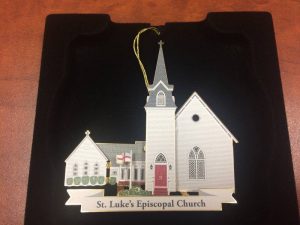 St. Luke’s Episcopal Church in Courtland is commemorated as an ornament, and now on sale at several locations. — Stephen H. Cowles | Tidewater News

This historic church traces its roots to the formation of Nottoway Parish in August 1734. The first church stood near Flowers Bridge, which crossed the Nottoway River just south of the Southampton Courthouse.

On March 17, 1873, the three trustees of the Protestant Episcopal Congregation of Jerusalem bought a three-acre track of land lying “immediately south by east of Jerusalem” for $25. Jerusalem was incorportated as Courtland in 1888.

One acre was set aside for a church and the remainder was to be used as a cemetery by the families of the church. By 1903, part of the property was sold to Courtland for a town cemetery and the proceeds of $300 were used to erect a new church. The present church was compelted in 1906.

Each ornament costs $20, comes packaged in a gift box, includes a printed history and qualifies as a tax-deductible donation.

The decorations are available the Clerk of Court’s office, Sonabank, the Peanut Patch, Nottoway House, all in Courtland, and Smith Jewelers and the Downtown Franklin Association.