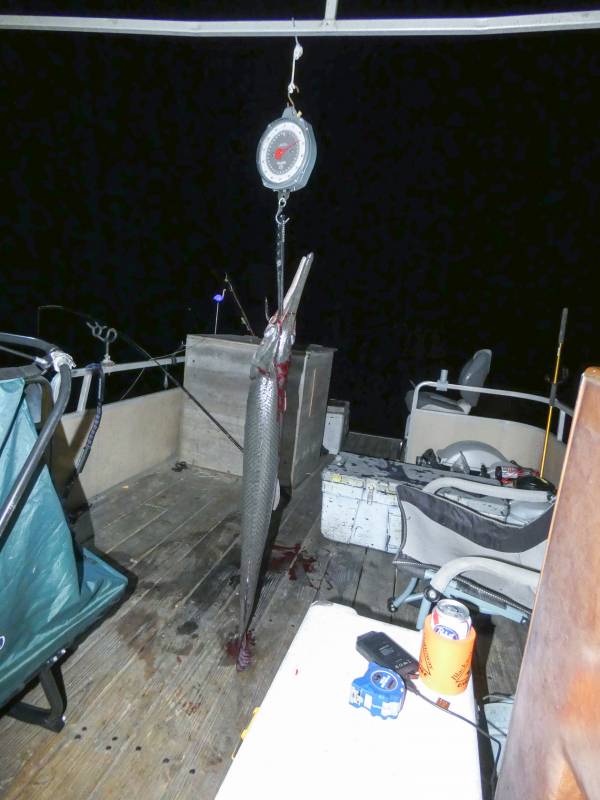 The RiverGuard caught this 14 pound, 49 inch gar on his recent trip on the Nottoway River. -- Submitted | Jeff Turner

Spirit of Moonpie and I spent the 18th through the 20th on the Nottoway below Delaware. The water was normal and 83 degrees, air temps ranged from 60 to 86 degrees.

It was pretty darn nice out there. Right off the bat I want to thank International Paper for getting that giant thing of hose out of the Blackwater River and also thank Norfolk Southern RR for clearing the logs, etc. that were blocking the Nottoway at the Courtland trestle. The people that utilize these rivers and I are very fortunate these two companies are attentive to keeping our rivers safe for the public.

Trash on this trip was very light; I picked up maybe five pounds of trash. I did collect an abandoned limbline and one abandoned green catfish noodle. Moonpie Critter Patrol was also light on this trip. We saw only the regular fare of creatures and almost got another flying turtle shot. The boats console just did get in the one frame I needed making the turtle’s head not visible … uggggg!

I also ALMOST got a couple pics of a Green Heron, but of course there was a branch in the way and then when I got past that it turned its back toward me … uggggg again! Have I mentioned before that I hate taking wildlife pics? Haaaaa!

The fishing on this trip was good. I caught plenty of bream and talked to several people that were doing well on the flyrod. I also caught a few small bass even though I was not fishing for them specifically. For the nighttime catfishing I caught three to eight pounds. However, on the second night at exactly midnight my gallon milk jug bobber took off screamin’ drag on the ol’ 6500 Ambassador reel.

I pretty much knew what it was as I was reeling it in. Catfish dig, gar go left and right shallow. Sure enough, when I got it to the lights of the boat I could see I had a huge gar. Those things that big can mess you up in short pants and no shoes so I had to be careful not to get cut up by its snootfull of needle-sharp teeth. Those things if they get to flapping around can rake death on exposed leg flesh, arms and hands, I know first hand from lessons learned in the past. So I had to put it to sleep. That’s done by zeroing in on the very top of its head, much like they do with gators. Except with a gar that sweet sleepy spot is ‘bout as fragile as an eggshell and only takes a good whap with a pair of channel locks to put the beast to sleep…for good. It’s the only place on a gar that is truly vulnerable. So after much safety precautionary work I finally got the prehistoric nuisance weighed and measured at 14 pounds and 49 inches long, my fifth largest to date.

So that was a pretty satisfactory outcome not getting hurt or cut up in all that process in the wee hours of the morning. I had another satisfactory experience the next day for breakfast. Famished the next morning from all that gar wrangling I went to make my only CLT of the trip, a yummy treat I had saved for my last meal of the trip. That’s a chicken, lettuce and tomato sandwich in case you could not figure out the acronym. So I whipped out all the stuff to start my sandwich build and to my horror discovered I must had left the lettuce at home.

MANNN, was I mad. I just sat there looking in the cooler where the lettuce was supposed to be and it just wasn’t. Disgusted I slammed the cooler shut and got ready to construct a deficient sandwich when I remembered I had a cucumber in the boat. Mmmm, I thought, a CCT sandwich? Why not a lettuce substitute, and so that’s what I did and it was yummy and the day was saved. So lettuce give thanks for awesome cucumbers and river sandwich ingenuity on the two rivers we call the Nottoway and Blackwater.