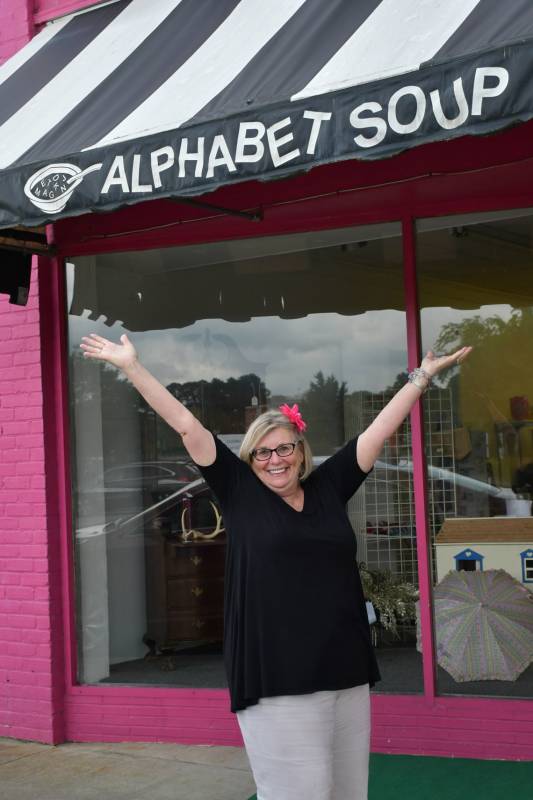 Gerry Patnesky, owner of Alphabet Soup on Second Avenue, on her last official day of business, which was Tuesday. However, she will quite possibly stay open through the week to sell the remaining stock. -- Mitzi Lusk | Tidewater News

FRANKLIN
This week, Gerry Patnesky begins trying retirement on for size to see if it will be a good fit. After 28 years, the proprietor of Alphabet Soup on Second Avenue is finally closing shop. Seated at a little table close to the storefront, Patnesky said she had been thinking about doing so five years ago. Still, the downtown merchant pressed on.

The decision to finally retire came about because — as Patnesky wryly phrased it — she had “come of age.”

Though her last official day of business was on Tuesday, there’s still some merchandise to sell. So if you somehow missed the sale that’s been in progress for the past few months, there might still be some bargain to find this final week. 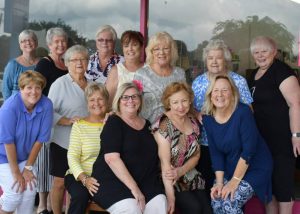 Gerry Patnesky, seated in center, with longtime friends and supporters of her business, Alphabet Soup. She is closing the business this week after 28 years in downtown Franklin. — Mitzi Lusk | Tidewater News

Originally, Patnesky was working out of her home in Franklin, doing embroidery work. A friend of hers in Bristol, Tennessee, got Patnesky interested in the craft. She used an elaborate machine for purses and whatever else people wanted ornamented. Her work thrived to the point where more space was needed, but she was leery of such a move.

“I was scared to death to come out of the house,” she said.

The late Nancy Drake, who was a downtown developer many years ago, told Patnesky of “a perfect place” to set up shop, and so she did.

What to call this first storefront of hers was given by the aforementioned friend, who pointed out that she deals in a “a lot of letters.”

At first, “It was a lot of work,” she recalled about managing her own place. “Exhausting.”

Like so many other merchants downtown, Patnesky was severely affected when Hurricane Floyd caused the Blackwater River to flood in fall 1999.

The rising water ruined not only her stock, but also the embroidery machine that was moved to the shop.

Support came from her church family at St. Jude’s Catholic Church, who paid not only the balance on the device, but also the regular bills.

While Alphabet Soup was being neatly rearranged, for five or six months the owner worked out of a trailer further up on Armory Drive.

That too was “fun,” she added, “because it didn’t seem real.”

Choosing not to return to the embroidery aspect of business, Patnesky decided to focus on supplying gift items such as silver jewelry. The Bristol friend later urged her to acquire the Vera Bradley line of items, such as luggage, bags, clothes and apparel. Then it cost $500 to become a vendor, which was a high amount at the time, but invest she did and it paid off.

Ten years after the tribulation of the flood, Patnesky and Alphabet Soup were honored as the Business of the Year. There to share both the tough times and successes has been her family, and her husband, Ed, in particular.

“What a wonderful asset Alphabet Soup has been to our community! It offered a fun-filled shopping experience where you could always find the perfect gift or something unique for yourself,” said Teresa B. Beale, executive director of the Franklin-Southampton Area Chamber of Commerce. “Gerry herself has been a gift to downtown Franklin where everyone was always welcomed with a smile, a friendly greeting, a quality product and excellent customer service.

“Owning a retail business isn’t an easy task, but Gerry thrived and we were delighted to recognize Alphabet Soup as the 2009 Chamber Business of the Year. I will truly miss this downtown icon, but wish Gerry a well-deserved retirement.”

Whether she’ll somehow return to work if retirement proves ill-fitting is months away, if at all.

Meanwhile, “It’s been fun,” she said about the career of providing quality gift items and clothes to her customers. “I’ll miss it.”

To those people who have either been regulars or dropped by just once or twice, Patnesky is most appreciative.

“Thank you so much,” she added.