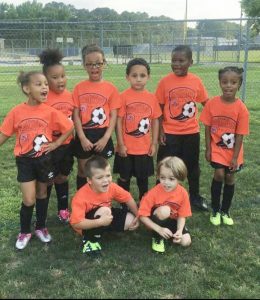 The league consisted of six teams with a total of 70 soccer players. Over 50 percent of the kids had the opportunity to play soccer for the first time. All teams were sponsored and named after local businesses/organizations. The teams’ names included US Express, Down The Middle, Camp25, Franklin Parks and Recreation, Kids Kab, and Deb’s Hair Studio.

Eric Benton, Executive Director of Camp25, would also like to send a huge thanks to Franklin Parks and Recreation.

Franklin Parks and Recreation provided the organization with soccer goals, balls, and a field. Camp25 is a non-profit organization that provides camps for kids when school is out. Programs include one-day camps, spring break camps, summer camps, soccer league and a volleyball league coming in the Fall.

Sammara Green-Bailey is a program specialist with Franklin’s Department of Parks and Recreation. She can be reached at 562-2475.