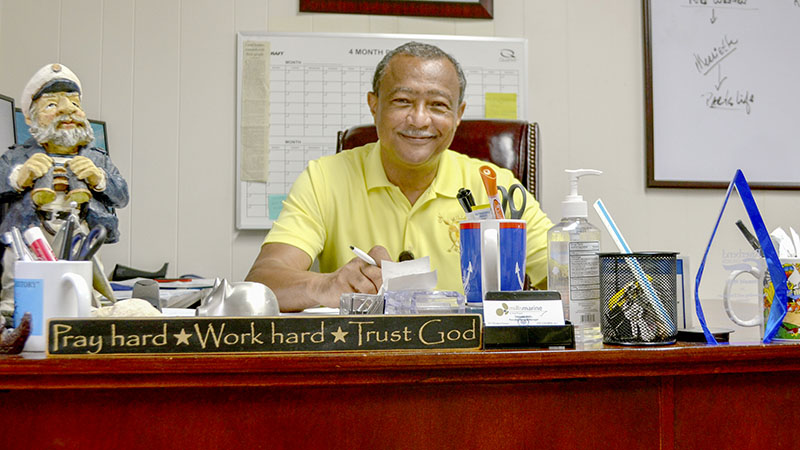 Special to The Tidewater News

NEWPORT NEWS
The shipbuilding and repair industry of Hampton Roads got a boost in June when a major hiring initiative was announced by Newport News Shipbuilding — the sole designer, builder and refueler of U.S. Navy aircraft carriers with approximately $4 billion in revenues and more than 20,000 employees, according to the company’s website.

The company will partner with the state to hire as many as 7,000 new shipbuilders over the next five years, according to the June 26 press release. Gov. Ralph Northam announced during a tour of the shipyard that state agencies and regional community colleges will work with Newport News Shipbuilding towards this goal.

“Newport News Shipbuilding’s success is important not just for Hampton Roads, but for the entire commonwealth,” Northam stated in the press release. “Therefore, it is critical that we support growth of this magnitude with an innovative partnership between state agencies that will address the company’s workforce and training needs and ensure a pipeline of skilled talent.

“To remain competitive in a 21-century economy, it is a priority to provide workforce solutions that connect Virginians to the skills, training and opportunities required to meet companies’ needs in high-demand sectors.”

Northam also announced Build Virginia, a separate initiative that will initially focus on jobseekers and employers in Virginia’s shipbuilding industry before expanding its resources to other industries, including construction and advanced manufacturing, according to the press release.

The Build Virginia website collects information on industry-recognized training programs, registered apprenticeships and other relevant resources for citizens to learn more about skilled trades and connect with employers.

“Across the Commonwealth, there are thousands of high-paying, quality jobs available in industries like shipbuilding, construction and manufacturing,” Chief Workforce Development Advisor Megan Healy stated in the press release. “Build Virginia will help raise awareness about these lucrative opportunities, highlight affordable ways to gain in-demand skills, and meet the current and future hiring needs of Virginia’s employers.”

The collaboration between Newport News Shipbuilding and Virginia agencies is expected to meet anticipated workforce demands at the shipyard for Ford-class aircraft carrier and Virginia-class submarine programs.

It should also support production of Columbia-class ballistic submarines, increased submarine fleet support work and the refueling and complex overhaul and defueling of Nimitz-class aircraft carriers, according to the press release.

Along with continuing to invest in its facilities and infrastructure, Newport News Shipbuilding will also re-train employees over the next five years to incorporate digital shipbuilding technology.

“As we continue to transform our business, we look forward to recruiting, training and retaining talented men and women who will help meet our workforce needs now and into the future,” Newport News Shipbuilding President Jennifer Boykin stated in the press release. “This effort requires strong community leadership. That’s why we are excited about this partnership with the commonwealth.

“Working with government, business and educational systems ensures we have the additional resources necessary to continue our investment in our greatest resource: our people.”

Newport News Shipbuilding is cultivating such people at its Apprentice School, which accepts about 225 apprentices annually and offers four- to eight-year apprenticeships in 19 trades and eight optional advanced programs.

Donald Mills, president and owner of Mills Marine and Ship Repair LLC, graduated from the Apprentice School in 1982 before founding his company in 2009, which then began operations in 2012. His company also does contract work for Newport News Shipbuilding.

“It’s the best decision I ever made, next to marrying my wife,” Mills said in his Market Street office in Suffolk on Monday. “They took care of me, and the work was steady. I am who I am in the industry because they helped make me so.”

He credited his managerial and trade skillsets to his years in school, especially the “waterfront experience.”

“When you’re not in class, you’re being trained eight hours a day to do your job,” Mills said. “They put you with likeminded people who have more experience than you and teach you how to do that.”

He said his goal for Mills Marine and Ship Repair is to grow from fewer than 100 employees to between 300 and 500 in the next decade. His company faces the same challenge as the rest of the industry, and that’s finding competent and capable workers.

“Your quality of work speaks for itself,” he said. “As the industry grows and the demand increases, there’s also going to be an increase in subcontractors and major prime contractors.”

His definition of a “qualified candidate” isn’t a recent graduate of a four- to eight-week training program. It’s a mechanic with at least five years of experience under his or her belt, ideally 10 years — which is why Mills is excited about the possibility of more offsite work that doesn’t require workers to have a security clearance.

According to Mills, this will allow him to hire employees who have experience and potential but also have criminal records that prevent them from obtaining clearances.

They’ll be my program managers. I believe you get out of life what you invest in it, and there’s no greater reward than investing into the life of somebody else.”

He said the ship repair industry can be difficult, but at the end of the day, it pays off.

“I don’t think there’s a better opportunity in this region than the ship repair industry for longevity,” he said. “Newport News is going to be around for a (long, long) time and the vessels are always going to require maintenance and updates. I think people are missing a perfect opportunity when they fail to see that, but you’ve got to prepare.

“Not everybody is cut out for college, but everybody needs a trade. They need a skill, and if you happen to have both? Hurrah.”