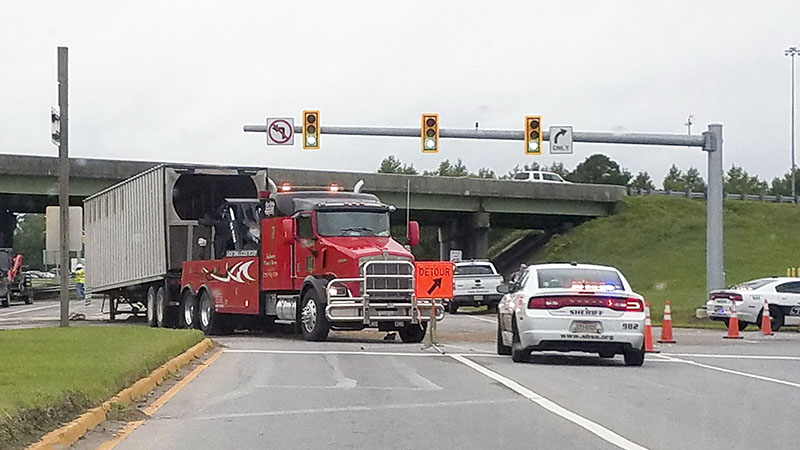 A tractor trailer carrying wood chips overturned on Armory Drive at its interchange with U.S. Route 58 on Tuesday afternoon. By around 6 p.m. the truck had been uprighted and relocated to the left turn lane. -- Stephen Faleski | Tidewater News

FRANKLIN
Southampton County sheriff’s deputies responded to a single-vehicle accident on Tuesday afternoon involving a tractor trailer carrying wood chips, which had overturned at the U.S. Route 58/Armory Drive interchange in Franklin. The accident resulted in the closing of all eastbound and westbound lanes of Armory Drive/General Thomas Highway for nearly five hours.

According to Lt. Camden Cobb, spokesman for the Sheriff’s Office, deputies were called at 12:54 p.m. The Virginia Department of Transportation was also called to the scene to assist with traffic control.

Traffic coming off of U.S.Route 58 east into Franklin was re-routed a short distance into the city. The tractor trailer and debris were removed and all lanes were reopened at approximately 6:45 p.m.

No one received medical treatment as a result of the accident. Deputies issued the driver of the tractor trailer a summons for failure to maintain control of the vehicle.