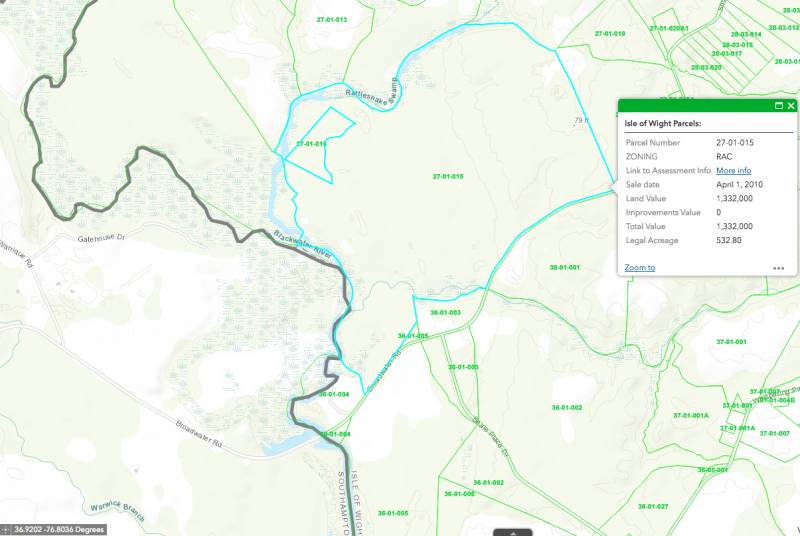 ISLE OF WIGHT
Isle of Wight County’s Board of Supervisors voted 4-0 with one absent on Thursday to reject a proposal by the Virginia Department of Game and Inland Fisheries to manage a county-owned parcel of land located along the Blackwater River.

The property, which is located off of Broadwater Road near the county’s border with Southampton County and the town of Ivor, includes 2,507 acres of forestland, 5 miles of which is river frontage. The county acquired the land in 2010 with financial assistance from the Virginia Department of Forestry and the Virginia Department of Conservation and Recreation. It has leased the property for the past several years to local hunt clubs.

The DGIF had proposed to open the site up for public hunting and fishing. Per the terms of the proposed 10-year agreement, the DGIF would have constructed three parking areas with signage displaying maps and information about the property.

With this option rejected, the county intends to instead form a task force to come up with alternate options for the site. The task force would be comprised of 12 members and headed by David Smith, the county’s director of Parks and Recreation. A report by the task force with recommendations is due to the board by March 31, 2019.

In the mean time, the county intends to hold a public hearing to consider re-leasing the property to local hunt clubs. The terms of the proposed lease, which would expire at the end of deer hunting season, are that 51 percent of a club’s membership be county residents and that the baseline price offered by the clubs be greater than or equal to the price paid by the previous lease holder. A date for this hearing has not yet been scheduled.

In other business, the board also voted 4-0 with one absent to approve a revised memorandum of understanding with the towns of Smithfield and Windsor for the operation of the county’s new 800 MHz radio system and emergency communications center. The agreement requires that the county pay 72 percent of costs, while the Town of Smithfield pays 21.2 percent and Windsor, 6.8 percent.