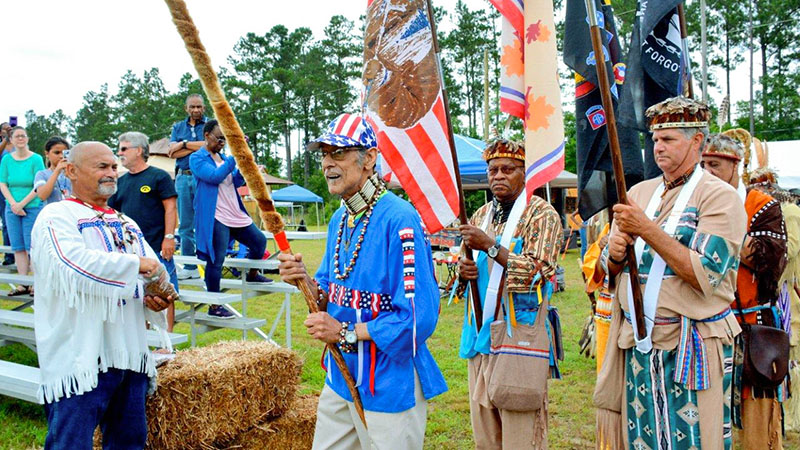 Members of the Cheroenhaka (Nottoway) Indian Tribe enter the ring for the grand march on July 7. The tribe celebrated its 23rd annual Green Corn Dance Powwow at the Cattashowrock Town in Courtland. -- Submitted | Bert Wendell Jr.

Head Male Dancer David “Spirit Hawk” Brown and Head Female Dancer Jade “Dancing Raindrop” Hughes lead the dancers into the sacred circle as the native drummers drummed out the heartbeat of the nation.

Dancers and drummers from across Virginia and North Carolina graced the powwow circle in their multicolor regalia. The special guests were the Aztec Dancers from New Mexico and the Archeological Society of Virginia – Nansemond Chapter, who conducted an Artifacts ID Day.

The tribal kitchen was busy all day dishing out Indian Bison Tacos, fish and chips, corn on the cobb and peach, apple and blueberry fried pies.

A letter to the tribe from Gov. Ralph S. Northam was read aloud by his representative, and then presented to Tribal Chief Walt “Red Hawk “Brown.

A resolution was read aloud, as penned and approved by the Southampton County Board of Supervisors, proclaiming July 7 as Cheroenhaka (Nottoway) Indian Tribe Day.

Some 600 visitors from across the states attended the powwow; to include, two international tourists from Japan.

Chief Brown stated the weather was great, 79-80 degrees, and that the tribe appreciated the support of all visitors attending the powwow especially the community at-large. He also thanked the Palm Tree Inn in Courtland for their hospitality as the Powwow Host hotel. 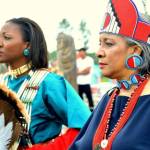 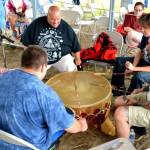 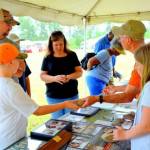 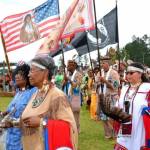 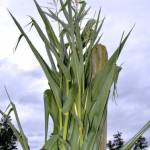 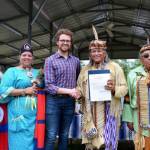