Tubing on the Blackwater

Spirit of Moonpie and I spent the 12th through the 14th on the Blackwater up and downriver from Franklin. The water was 79 degrees, clear and a perfect level. Air temps ranged from 60 degrees to 86.

It was nice to get back on the river after being absent for a whole month due to several factors. I’d like for that not to happen again but, alas, old age dictates what I do more and more these days. 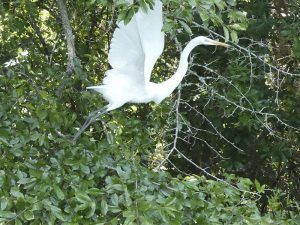 The RiverGuard took this photo of a Great Egret on the Blackwater River.

The fishing on this trip was both good and bad. I caught plenty of fish casting along the shore, however I was skunked both nights catfishing. I was plagued with gar constantly stealing the bait. I even tried several tactics to try to snare one and keep them from stealing the bait, but nothing worked.

I did have one monster cat hit that took the gallon-sized float completely underwater and out of sight, but I did not connect and it was gone before I could get to the rod. The second night I went upriver through the trestle (which is a tight squeeze in that pontoon boat,) mostly due to the fact I was cleaning up in that area and didn’t want to have to travel all the way downriver again. I knew the blue cat bite isn’t as good up there, but I took the chance anyway … and lost! Oh well, that’s the way that is sometimes.

The Moonpie Critter Patrol was busy this trip. We saw deer, beaver, herons, hawks and a bunch of different snakes including a king snake swimming the river. We also saw the cows in the river, which is good for the cows, bad for the river. I also got another flying turtle picture, though I only had camera shutter on 1000 and that was not fast enough really. However, I got some great footage of an Osprey flying around carrying a fish. It would fly from tree to tree ahead of me just toting this fish. I guess it was just shy about eating in front of Moonie and me.

Trash was pretty bad on this trip, but I expected that since it had been over a month since I was last out there. I also towed in a huge coiled mass of plastic tubing. It was about 6 feet in diameter and way too heavy for me to get into the boat. When Moonpie asked me what it was and I told her it was tubing, she instantly got the idea that she wanted to “go tubing” on it. I had to explain that this was not the correct device to go riding on at 20 mph. So I towed it to the mill (without Moonpie on it) and tied it up where they can get it. The mill folks are very nice about helping me with stuff like that I am sincerely grateful for all their help over the years.

GREAT NEWS! Hopefully, the trash issue from the two Franklin stormwater ditches will be cut nearly in half. We bought an expensive 100-foot trash boom last year to go in the Bogart retention pond.

That boom will skim floatable trash headed to the river trapping it so it can be collected, and there is a volunteer group that has already pledged to help remove that trash. Final preparations are being made by the city now to get that boom deployed.

It will be a great help in keeping the Blackwater a more scenic river for sure. It would be nice if we didn’t have to do things like this, and we wouldn’t if nobody threw their litter in the roads and ditches. But the reality is they do and it’s the way it is. That’s why it’s soooo fantastic that the city is now going to make this effort to protect one of our two beautiful rivers we call the Blackwater and Nottoway.