WINDSOR|
Chuck and Donna Cowger of Smithfield are pleased to announce the engagement of their daughter, Katie Marie, to Lance Daniel Wall. 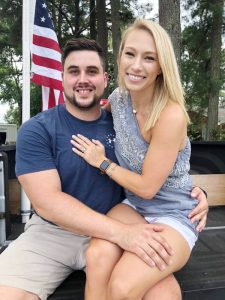 Lance Wall of Windsor demonstrated his loyalty on the 4th of July when he asked Katie Cowger of Smithfield to marry him. She said yes. That was the same day that his grandparents, Reuben and Jane Wall, were celebrating their 59th wedding anniversary. — Submitted | Laura Zabinski

Katie is a 2013 graduate of Smithfield High School.

She is employed as a Pre-K teacher at the Montessori Academy in Suffolk.

Lance is a 2011 graduate of Windsor High School, and a 2015 graduate from Randolph-Macon College in Ashland.

He works as an appraiser for the City of Suffolk. He is also known as “Coach Wall” when he coaches football for his high school.

Katie and Lance got engaged in a fairy tale mystery the morning of Wednesday, July 4.

That day was truly a special one for them. Katie and Lance share their engagement day with his grandparents, the Walls, as it was their 59th wedding anniversary.

FRANKLIN Bobby and Linda Turner are pleased to announce the engagement of their daughter, Kayla O’Rourke, to Cody Lance, son... read more