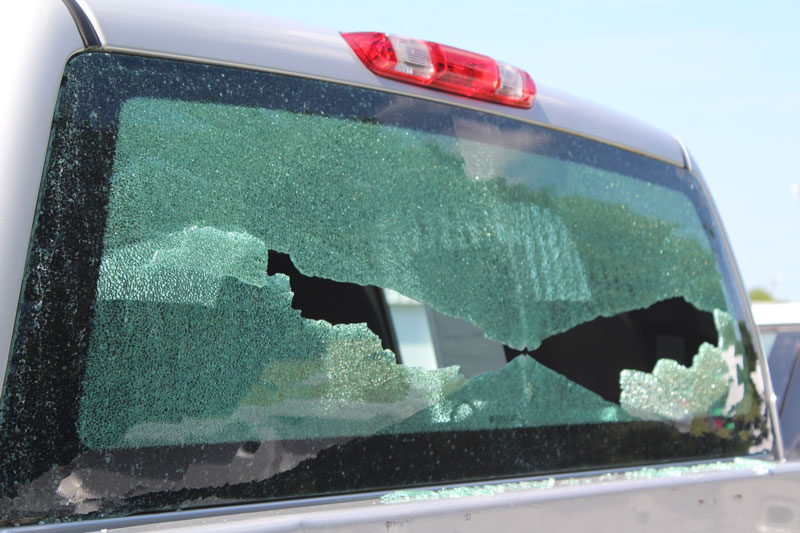 Gunfire early Friday afternoon struck the rear window of this 2011 Silverado, which was parked in the back of the Blake Ford dealership. — Stephen H. Cowles | TIdewater News

FRANKLIN
On Friday at 12:47 p.m., Franklin Police officers were called to Blake Ford at 1101 Armory Drive after an employee reported hearing six to eight gunshots coming from the neighborhood behind the business.

According to Capt. Tim Whitt, spokesman for the department, responding officers checked the area but did not locate any suspects.

Approximately 15 minutes later, Blake Ford called back to the police department to report that a truck on their lot, a 2011 Chevrolet Silverado, had been struck by a bullet, shattering the back window and causing approximately $500 in property damage. No injuries have been reported.

“While the gunshots themselves are troubling, even more so is the fact that the trajectory of the bullet was in line with the service department, which had its bay doors up and employees working inside,” Whitt said. “It is lucky the truck stopped the bullet.”

If anyone has information about this crime, they are asked to call Franklin Police at 562-8575 or Franklin Crime Solvers at 562-8599. Information that leads to an arrest can earn the caller a cash reward while remaining anonymous.