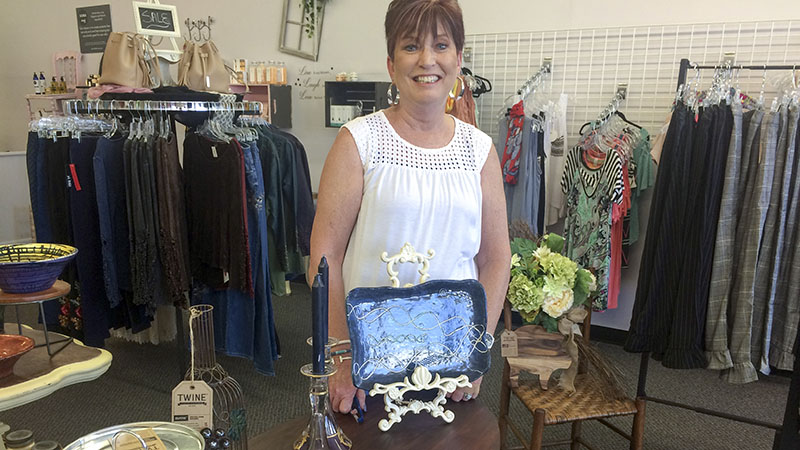 Barbara Nixon has brought in a variety of clothing, gift items, home accessories and healthy beauty aids for her store, Lavender and Lace on Second, located within downtown Franklin. -- Frank A. Davis | The Tidewater News

FRANKLIN
Lavender and Lace on Second in downtown Franklin invites people to do more than just run in, take a quick look, maybe buy something and then rush out.

Barbara Nixon, the proprietor, has designed this store — her first ever — to be a shopping experience for customers. That begins as soon as they stroll in, feeling the effect of the cooling and calming décor, hence the name.

A variety of colorful and fashionable clothes, jewelry and purses for women, gift items, home décor and even healthy beauty aids are strategically placed, further welcoming shoppers to explore. Nixon’s retail experience makes her knowledgeable about what she believes people would like, and that features quality products at affordable prices. The Richmond native also makes it a point to be personable but not nosy with clients.

As seasons progress, new items such as products for men will be introduced. Her intention is to keep the place and stock fresh as possible.

Previous to all this, Nixon had a 40-year career helping medical practices with their setups, billing and collecting.

“I wanted something for myself,” the Courtland resident about the new career in retail. “This is my dream.”

Two years ago is when Nixon actually started making her way toward fulfilling that goal by first becoming a vendor at a place within a mini-mall in Emporia. There she sold new and used items, all the while earning a positive reputation. So much so that people invited, urged her even, to come to Franklin. But she was hesitant, not wanting to compete with established businesses.

Later, Nixon evidently began to think what she wanted to do next in retail.

“I learned a lot beforehand. I did my research,” she said. When a space became available here this past April, Nixon realized it was the proverbial “now or never” time.

Then the decision to come here became what she called “a no-brainer.”

“I’m coming to Franklin,” Nixon said then, and began taking the steps to be where she is today.