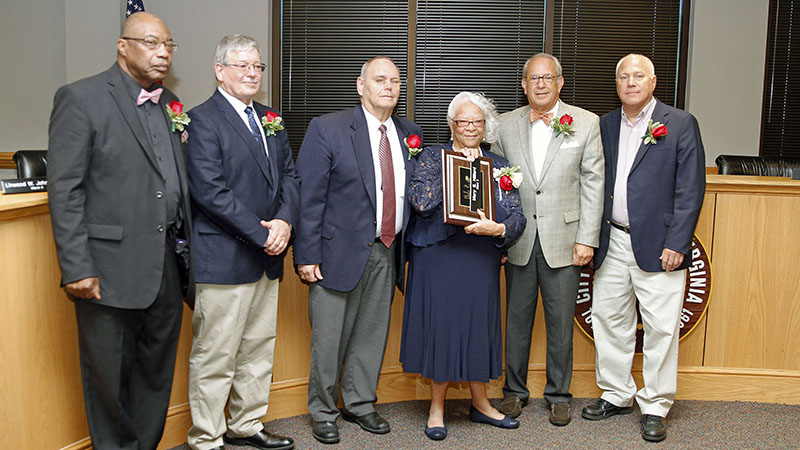 The members of Franklin City council with Mary Hilliard after presenting her with a plaque and copy of the resolution honoring her time on council. -- Frank A. Davis | The Tidewater News

FRANKLIN
Franklin’s City Council honored retired councilwoman Mary Hilliard on Monday with a resolution commemorating her 30 years of service to the city. Hilliard, who has served as Ward 5’s only representative since the introduction of the six-ward system, holds the record as the longest-serving member of council in the city’s history.

Succeeding her as Ward 5 representative is her daughter, Wynndolyn Hilliard-Copeland, who was elected in May, defeating challenger Ricky Sykes with 131 votes to his 125. Present at the meeting were voter registrar Jennifer Maynard, who certified the election results, and retired Southampton County Judge Westbrook J. Parker, who administered the oath of office to Copeland and two of the three other members of council re-elected in May. Councilman Greg McLemore, who was re-elected to the Ward 3 seat, chose to go to Southampton County’s Clerk of Circuit Court, Rick Francis, on July 5 to be sworn in.

Copeland, in her opening remarks as an elected member of council, thanked her family and friends for their prayers and support, thanked the citizens of Ward 5 for trusting her to represent them, and asked that the council strive to work as a team.

Following the swearing in of new and returning members, the council began its biennial organizational meeting. During this time, Ward 1 Councilman Barry Cheatham was re-selected as vice mayor by a vote of 5-1 with one abstention. McLemore was the dissenting vote. Mayor Frank Rabil then proposed amending the procedures of council to include the following:

• Unless a council member is absent from a meeting or has a declared conflict of interest, he or she should vote “yay” or “nay” when the question is called, and not abstain.

• The general discussion prior to a motion being made is to be limited to two minutes per member of council.

• Discussion during a presentation shall be limited to two questions or comments totaling five minutes.

• Once a motion is made, each member of council is limited to one comment or question period consisting of five minutes.

• After all members of Council have had a chance to participate in the questions and answers, each member is then allowed an additional three-minute rebuttal period to respond to fellow council member’s comments.

• No questions or comments are allowed during Citizens’ Time.

One unscheduled matter for discussion that Councilman Benny Burgess requested be added to the agenda for that evening was the issue of duplexes in areas of the city zoned R2 residential.

Currently, city zoning ordinances define duplexes in R2 zoned areas as a nonconforming use, but several houses that were built as duplexes prior to the adoption of the ordinance have been grandfathered. The issue is that these properties are no longer permitted to remain duplexes if any of these houses become vacant for more than two years, are destroyed or undergo renovations costing more than two thirds of the assessed value of the property.

“The catch 22 we found ourselves in is some of these structures have been vacant for years,” Martin said. “The owners can’t do anything with them because they’re not designed as single units.”

The council has asked for a draft initiating resolution adding duplexes, but not triplexes or four-units, back into the city’s list of conforming uses, to be presented at the July 23 meeting. Martin clarified that the four-unit on Second Avenue near J.P. King Jr. Middle School had been rezoned separately to permit its use as a four-unit. If approved by the council, the initiating resolution will be sent to the city’s Planning Commission for further review and a public hearing.