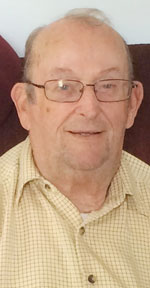 Bobby graduated from Southampton High School in 1957, and served in the Army National Guard for five years.

He made a career as a lab technician beginning at Gray Products in Waverly, then Allied Chemical in Hopewell, and ending at Union Camp in Franklin from where he retired in 1998.

Bobby enjoyed having a variety of animals on his farm, raising a garden and being around people. But his true passions were cooking and dancing. He was always trying a new recipe. He was known for his peanut brittle, which he sold locally as well as in Eastern North Carolina. He took great pride in his candy business, having won “Best Candy” award at the Atlanta Gourmet Market in 2008, when submitted by Powell and Stokes of Windsor, North Carolina.

On Friday nights he could be found having dinner at his daughter Kelli’s home with her and her family, then heading to Lasker to the Grand Ole Opry to dance the night away with his many friends.

Bobby is survived by his daughter, Kelli Garris (Neil) and grandchildren, Morgan and Justin, all of Conway, North Carolina; two sisters, Bonnie Hasty (H.L.) of Courtland, and Sarah Womble of Franklin; and numerous nieces and nephews.

The memorial service will be at 2 p.m. on Tuesday, July 10, at Wright Funeral Home in Franklin with the Rev. Rita Kanten officiating.

The family would like to thank the staff of The Village at Woods Edge, especially his sitters, Liz Hamlin and Valerie Riddick.