COURTLAND
Of the nine concepts that have previously been presented for the Southampton County Circuit Courthouse, the Board of Supervisors on Monday narrowed the choices to three. These are labeled by Moseley Architects as Option 5B, Option 5C and Option 7. 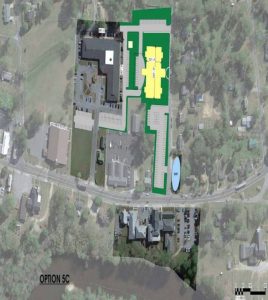 The second plan, which was developed during the May meeting, would be to construct a new building to accommodate all courts functions on property that would have to be acquired along Court Street. — Submitted | Moseley Architects

• The first of those plans would be to construct a new building to accommodate all courts functions in front of the County Office Center with some parking made available on part of the land owned by neighboring Courtland Baptist Church. County Administrator Mike Johnson said he’s talked about that feature with two trustees, which reportedly expressed a willingness to listen. The estimated cost would be $22.6M, but that doesn’t include repurposing the existing facility. The voter registrar and storage building would have to be relocated, neither of which is figured in the estimate.

• The second plan, which was developed during the May meeting, would be to construct a new building  to accommodate all courts functions on property that would have to be acquired along Court Street. The estimated cost is still to be determined, but is expected to comparable to the aforementioned option plus the cost of obtaining the property. Rather than remove the Bell House for more parking, Johnson recommends leaving it to “minimize adverse impacts on the historic Main Street views,” and instead create parking at the front law of the office center.

• The third plan is to construct a new building adjacent to the existing courthouse. That would mean acquiring the Seven Gables property next door. Further, the ‘60s wing would be demolished for parking. The new building would be in the floodway, and mitigation would be needed. The estimated cost is $23M, but that doesn’t include property acquisition or repurposing the existing facility.

Ronnie West, vice chairman of the board, said of the matter, “We have to do something. If we do not work with the judges, then it could come down to the Virginia Supreme Court to dictate the matter.”

He then suggested Option 5B.

Supervisors Barry Porter echoed West’s comments, adding that if the state took over the project, the price could double or triple. He favors 5B, 5C and 7; fellow supervisors Dr. Alan Edwards suggested 5B and 5C, adding that that other options “step on too many toes.”

Newsoms supervisor Randolph Cook said to build a new courthouse in the flood plain would be “foolish.”

Bruce Phillips for Capron suggested keeping four options: 2, 4, 5C and 7, and leans toward 5C. He again the urged board to take one more month for a public hearing, which will be done at the meeting on Monday, July 23.