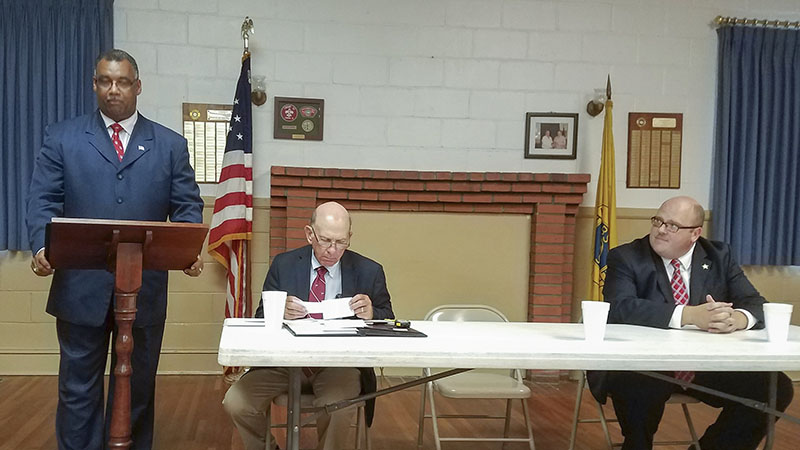 Interim Sheriff James Clarke delivers his opening remarks. On the right is Lt. James Pope, and in center is John Edwards, publisher of The Smithfield Times, which sponsored the forum. -- Stephen Faleski | The Tidewater News

The forum was held in the Windsor Ruritan Clubhouse and was well attended. It began with each candidate being given five minutes to make an opening statement. During this time, Pope affirmed his commitment to restoring full-time school resource officers in each of the county’s elementary schools, while Clarke spoke of his desire to continue good hiring practices and to increase the department’s interaction with Isle of Wight citizens.

The candidates also used this time to highlight their educational background and law enforcement experience. Clarke, who retired from the Marine Corps with the rank of first sergeant, said he joined the Smithfield Police Department in 1998, eventually rising through the ranks to patrol lieutenant. In 2012, he joined the Isle of Wight Sheriff’s Office and was made chief deputy. He has two associate degrees, one in general studies and another in police science, and will soon complete his bachelor’s degree from St. Leo University. He is also a graduate of the FBI National Academy.

Pope said he had been with the Isle of Wight County Sheriff’s Office for a total of 14 years. He has held the rank of lieutenant for the past seven years, and prior to that was patrol deputy. He has also served as the Sheriff’s Office’s liaison to the county’s emergency services department. He is pursuing a degree with Liberty University online, and has attended other schools including the Command Leadership Institute.

The first question Edwards posed to the candidates was on school security.

Another question Edwards asked was what each candidate felt was the biggest challenge facing the Sheriff’s Office over the next two years, which is the remainder of the term vacated by former sheriff Mark Marshall earlier this year. Clarke replied that hiring great candidates had become more difficult and that the population growth in Carrollton had become a huge demand on law enforcement.

“In my 20-year career, I’ve seen where the application pool has diminished,” he said. “Law enforcement has gotten a bad rap, we don’t get qualified applicants like we used to.”

Pope agreed with Clarke’s statements on Carrollton. However, despite the latter’s comments on recruitment, neither candidate felt that the Sheriff’s Office had the same retention issues that other local law enforcement agencies were experiencing.

“Isle of Wight’s problem is much smaller because we try to hire within the community,” Pope said. “We don’t have a lot of employees who leave for other law enforcement jobs, we have people who leave to get out of law enforcement.”

When asked about the types of problems Route 460 brings to the county, both candidates agreed that there were safety and traffic volume issues with the highway that needed to be addressed. They also agreed when asked about the possibility of having more of a presence on the southern, more rural part of the county.

“We have to go based on call volume, and the call volume is higher on the northern end,” Pope said, but added that if someone on the southern end were to call for a deputy he did not want there to be a 30-40 minute response time.

“I live in rural Isle of Wight,” Clarke added. “It’s important to me that we have that coverage. I will be looking at how we can make some allocations.”

They also both said they had no plans to make any personnel changes, provided that the deputies under them felt they could meet expectations.

The candidates were also asked about regional and national issues such as their opinions on the second amendment, police misconduct, the opioid crisis and whether they felt marijuana should be legalized.

On the second amendment, Pope said, “It will always be what it is, the right to carry a firearm, but that person has to be legally eligible to carry a firearm. We talk about who shouldn’t be eligible, be it mentally ill or a criminal,” and said he felt the sheriff’s office should to everything in its power to prevent people who are not eligible from getting their hands on a gun.

Clarke agreed, saying he grew up as a country boy and believed in the right to bear arms and to protect your life and property, but said that if there is one background check that is overlooked or if one individual purchases a weapon and should not have been legally able to do so, he felt that was “one too many.”

On police misconduct, both candidates said that the Sheriff’s Office has procedures in place to handle citizen complaints. Pope said he felt that deputies shouldn’t be treated any different than civilians who are accused of misconduct and that the Sheriff’s Office would investigate fully any allegations. Clarke said he expects the public to hold him accountable as sheriff, that he would hold his deputies accountable, and that disciplinary action would be taken if necessary.

On the opioid crisis, Pope said that deputies carry Narcan sprays in their cars so they can provide first aid to someone who has overdosed, and pointed out that addicts aren’t always “bad guys.”

“People who get into a car crash, they get prescription pain relief, and there are laws that prevent doctors from giving them refills, they take more than they should so they turn to the streets,” he said.

Clarke agreed that the crisis had consumed good people, and said the Sheriff’s Office is working hard on its task force partnerships to combat the crisis.

As for marijuana, both felt that the drug should remain illegal on the grounds that it could serve as a gateway to other, more dangerous drugs and also that it could impair driving.

The special election for sheriff will be on Tuesday, July 24.