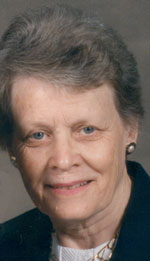 Mary Lee was a native of Southampton County, a daughter of the late Fadie and Daisy Cutchins, and was also predeceased by a daughter, Diane Horne; two brothers, Roland and Raymond Cutchins; and a sister, Violet Reid.

She was a member of Courtland Baptist Church, and was retired from St. Regis Paper Company.

The family would like to thank the staff of East Pavilion South for their wonderful care.

The funeral will be conducted at 2 p.m. on Tuesday, June 26, in Wright Funeral Home, Franklin, where the family will receive friends one hour prior to the service. The Rev. Hoyle Green will be officiating. The burial will follow in Riverside Cemetery.

Memorial donations may be made to Black Creek Baptist Church or the Alzheimer’s Association. www.wrightfuneralhome.org.