FRANKLIN
Dr. Gabrielle Gatten has joined her father as the fourth generation in their family to serve patients’ vision needs in Western Tidewater. 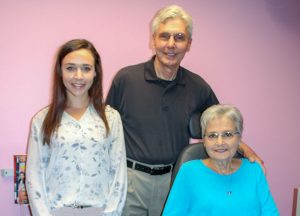 Dr. Gabrielle Gatten, left, with her father, Dr. Ernest B. Gatten III of Gatten Eye Care Center in Franklin. With them is Andrea Bryant, who served as an assistant for 40-plus years. She came in this past week to help Gabrielle with some training. — Stephen H. Cowles | Tidewater News

Of course the choice to follow her father, Dr. Ernest Burdette Gatten III, was hers alone.

“There was no push to do it [become an optometrist,” Gabrielle Gatten said on Tuesday afternoon at  Gatten Eye Care Center in Franklin. While considering that as a career, she shadowed such doctors at the VA Hospital in Salem.

“You have to want it [as a career,]” said her father. “It can be grueling work. I helped to prepare her for this.”

Such research and preparation evidently confirmed her decision. A graduate of both Southampton Academy and James Madison University, Gabrielle went to Salus University’s Pennsylvania College of Optometry in Philadelphia, and graduated just this past May.

Burdette Gatten, as he’s usually known, said he first considered during high school to pursue a career in herpetology, the study of reptiles and amphibians.

His own father, Ernie, suggested “in his wisdom” that might not be the most rewarding choice.

“Then I saw his practice and how engaged he was helping people,” said Burdette, and so became the third person in the family to learn optometry. Grandfather Richard had been the first.

At the start of her day on Tuesday, she got some assistance from Andrea Bryant of Newsoms, a longtime family friend, as well as a 40-plus year employee with the Gattens (“Just nice people.”)

“I loved what I did,” said Bryant, who recently retired.

The Boykins native said that after a stint in the Air Force, she returned to the area and saw an opening for a receptionist at Gatten Sr.’s office. By then it was already a well-known name, she added. Through on-the-job training Bryant was working with patients within the year.

Gabrielle Gatten pointed out that there’s much more to optometry than checking people’s vision and prescribing new glasses or contact lenses. The training and the tools of the trade have become developed to the point they can help doctors such as herself detect other medical issues, which can be previewed by eye exams. Diabetes, hypertension and blockages in the carotid artery are some examples.

“It’s very rewarding,” she said about being able to help patients this way.

Such advances require periodic professional development, which the senior Gatten attends; certainly his daughter will be doing the same in the decades to come.