To the Editor:
Those who know recent Franklin High School graduate NyJey Pope easily mention such superlative terms as scholarly, athletic, community-oriented, dedicated, and hardworking. I first met NyJey (pronounced Ni’ Jay) last fall when he was selected as the student representative to the Franklin School Board. It does not take one long to realize that he is an outstanding representative of the quality graduates FHS produces. 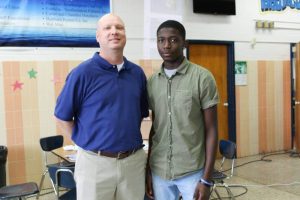 In terms of scholarship, NyJey ranked second in his class and has received a full academic scholarship to attend the College of William and Mary. He plans to attend law school and become a judge.

He was a member of the National Honor Society and served as president of the Student Government Association. He was also a student representative on the superintendent’s advisory board.

FHS Principal Travis Felts says that “NyJey is an outstanding young man who I am confident will achieve great things at William & Mary and beyond. He is not only a high achieving student academically and athletically, but he is a natural leader. He is one who leads by example in a humble and respectful way. He has the total respect and admiration of the students and faculty at Franklin High School. I cannot wait to hear about all of his future accomplishments.”

His basketball coach Robby Cutchins had this to say: “Over my 15 years of coaching I’ve had the luxury of coaching many young men that represent our city and our school system. Each one of them have something that is unique about them. NyJey, however, is one of a kind for many reasons.

He is a young man that is in a league of his own to be exact. His approach to school, basketball and life is the reason he is knocking down the door to success. He was not only successful in the books and on the basketball court, but he will definitely be successful in the most important game he will ever play, and that’s the game of life.”

Community service has been a huge part of NyJey’s life. At FHS he was a member of the Junior ROTC program and participated in its canned food drive and headed the Red Cross blood drive.

Realizing the importance of education to younger students, he tutored students in the summer enrichment program at S.P. Morton Elementary School and after school there on the rare occasions when after school sports do not take him away from that effort. NyJey also tutored elementary and middle school students through the Young Lions Mentorship Program at the First Baptist Church. He also works part-time at Arby’s in Franklin.

NyJey credits many people for providing the inspiration and support for his successes.

He stated, “My family and teachers were all huge supporters of my dreams and encouraged me to keep going hard and to stay focused. I couldn’t ask for any better individuals to surround me; particularly Mr. Felts, coaches, my mother and grandma. I love my Bronco family, and I am proud to be a Bronco and will always be one.”

There is no doubt that we will learn of this outstanding young man’s accomplishments in the future!

More Letters to the Editor

LETTER: Hall has proven her support for staff, students