Looking back: Part of Franklin’s past is lost 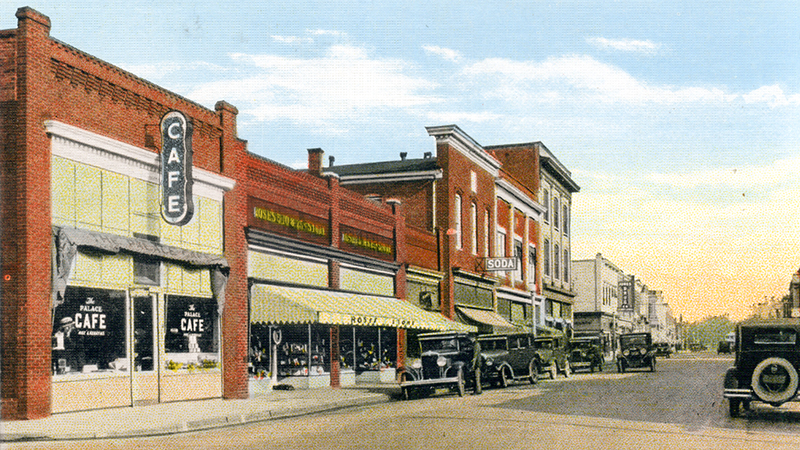 This colorized photo postcard was incorrectly labeled showing Main Street looking north in Franklin, when in fact it's facing south. Note the Palace Café at the corner. That restaurant stood from May 1916 to at least 1931.

The recent burning of the building situated on the southeastern corner of North Main Street and East Third Avenue has caused much discussion. Many people are reminiscing about their experiences with the various businesses that occupied that property over the years.

For the most part, older people are talking about the location when it was Roses 5-10-25 Cent Store. That store occupied the building from the late 1930s right on up to the early 1960s (1963-1964) when it was relocated across the street on the site of the old Raiford Memorial Hospital, which was torn down to make way for the new Roses store. Roses, at the old location, was noted for its amazingly large quantities of bulk candies and various kinds of nuts; both were available by the scoopful. Roses was a very complete variety store. And it was the place to go to buy comic books.

However, most people are not old enough to know of the previous early-day uses or occupants of that property. The oldest found document, showing early use of that property, is a 1912 town plat that identifies the property as the site of an open air moving picture theatre (no store buildings.)

A 1917 town plat shows on that property a building that housed three separate businesses: an indoor movie theater on the immediate corner; a poolroom in the middle; and a grocery store to the right of the poolroom.

A 1923 town plat shows the same building with two store spaces: one on the immediate corner and a separate (but somewhat divided) building south of it. That plat shows three separate street addresses: 208, 210 and 212 N. Main St.; however, that plat does not identify the type of businesses that were located there.

We do know that for a period of time, from May 1916 to at least 1931, the Palace Café was located in a building at the corner with a partial second story, with an address of 212 N. Main St.

A long-felt need for a first-class restaurant in Franklin has been admirably filled by the new “Palace Café,” which was opened for business this week in the store building, on Main Street, that was formerly occupied by the City Grocery Company. L.E. Derr, proprietor of the Daisy Bakery, is owner of the new café, and C.C. Hayes, a restaurant man of experience, is in charge.

The new café is fitted-up in the most modern manner with marble top tables, steel chairs, etc. A tempting menu will be maintained at all times at reasonable prices. The café will give a 7-day service, and will be open every evening until 11 o’clock. The kitchen is on the second floor, insuring patrons against the usual heat and odors so objectionable where kitchen and dining room are on the same floor.  Mr. Derr will appreciate the patronage of the public — especial attention will be given to ladies and children. 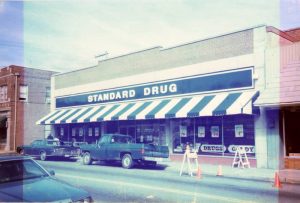 In 1982, Standard Drug occupied what was once space for three separate businesses. — Courtesy | Downtown Franklin Association

An old postcard, part of the Stan Rich collection, shows the Palace Café in the corner building; and, other postcards from the Rich collection show the various other frontages of those buildings.

As stated in previous stories about the recently burned building, over the years many other businesses occupied the property. When the building was occupied by “Roses 5-10-25 Cents Store,” starting in the mid- to late-1930s, all three of the previously single occupancy store buildings were consolidated into one large single space, with three entrances. And a facade was extended to cover the entire frontage of the new store.

And later, when Medco Drug Co., Standard Drug Co., Trinkets and Treasures and a few other independent businesses occupied the property, for the most part, the entire space was used. 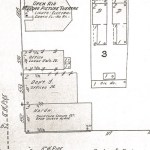 This plat from August 1912 shows that an open air moving picture theater was at the southeastern corner of North Main Street and East Third Avenue. 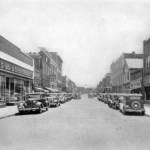 Rose’s 5-10-25 Cent Store occupied the southeastern corner of North Main Street and East Third Avenue from the late 1930s through the early 1960s. 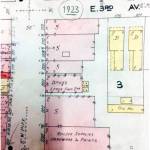 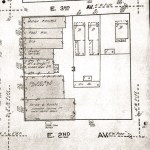 By October 1917, the movie house was still standing, with a pool room, grocery, jewelry and a drug store with rooms to rent on the second floor.