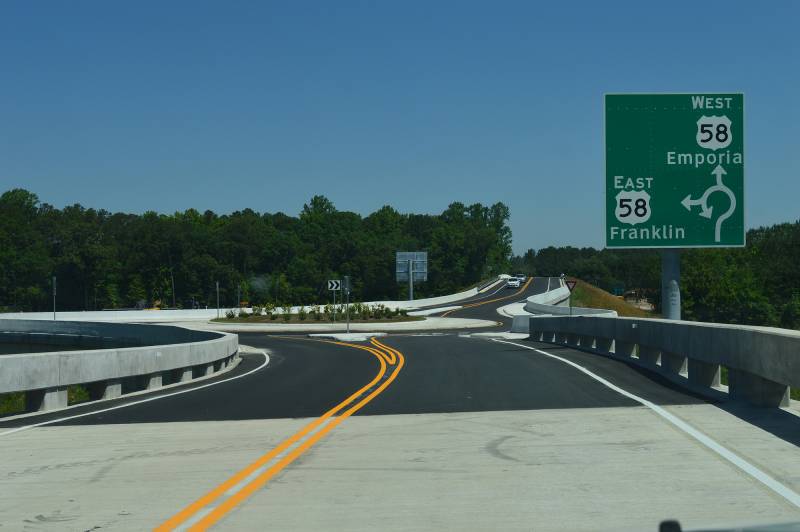 Looking north on the south side of the south roundabout. Coming over the new bridge of wetlands, travel through the roundabout then travel over the bridge over U.S. Route 58. Submitted - Shellee Casiello. 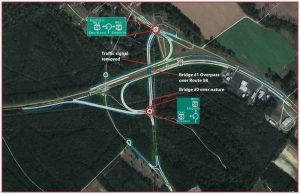 An aerial rendering of the new interchange with the recently completed roundabouts highlighted in red. Submitted – Shellee Casiello

Contract crews with the Virginia Department of Transportation opened two roundabouts and a flyover on Tuesday at the Courtland Interchange, eliminating the need for the traffic signal at the intersection of Southampton Parkway (U.S. Route 58) and Jerusalem Road.

According to Shellee Casiello, senior communications specialist with VDOT, this milestone in the Courtland Interchange Project, which began in March of 2016, has been reached months ahead of schedule. Crews are now expected to finish the entire project well ahead of the originally anticipated December 2018 completion date. 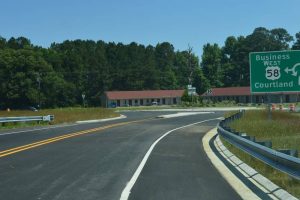 After crossing the new Route 742 bridges over wetlands and over U.S. Route 58, motorists will arrive at the roundabout for U.S. Route 58 Business (Jerusalem Road.) Submitted – Shellee Casiello

The new traffic patterns include two roundabouts, one on each side of Southampton Parkway, directing traffic through the intersections in a one-way pattern. Crews constructed a flyover (overpass) over Southampton Parkway as part of the relocated State Route 742.

A second Route 742 bridge was built to minimize environmental impacts. The construction of the U.S. Route 58 westbound on-ramp is expected to be completed within a week, allowing traffic to flow in the permanent direction.

Roundabouts are new to this area and motorists are advised to follow the directional signs and yield to traffic when entering the roundabouts.

More information on the Courtland Interchange Project is available at www.virginiadot.org/projects/hamptonroads/courtland_interchange.asp.