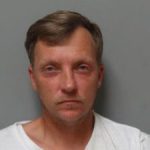 According to Maj. Gene Drewery, spokesman for the Southampton County Sheriff’s Office, a deputy attempted to stop a vehicle at the intersection of Martin and Darden streets in the Southampton Meadows Trailer Park, located off of Smith’s Ferry Road near Franklin. The driver of the vehicle disregarded the lights and siren of the patrol car and left the trailer park, heading south on Smith’s Ferry Road.

The vehicle reached speeds over 100 miles per hour and the pursuit went into North Carolina before coming back to Southampton County on Statesville Road near Greenbrier Road. At this point, two rear passengers reportedly jumped out. A deputy detained these individuals as other deputies pursued the vehicle.

The vehicle ultimately crashed at Barnes’ Church Circle. The driver was found to be Bret Charles Agee, 38, of Rescue. The two rear passengers alleged that they were trying to catch a ride and Agee would not let them out after the deputies started chasing them.