WINDSOR
Anna Heffington of Windsor knew she wanted to pursue a performing arts career since she was 5 or 6 years old. Now, the soprano and recent high school graduate will soon relocate to New York City to make her dream a reality — but not before delivering one final solo recital for the residents of Isle of Wight County. 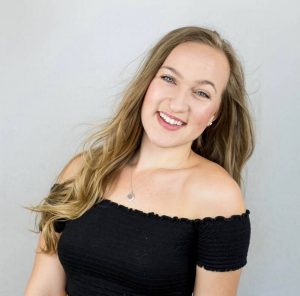 On Sunday, June 10, at 4 p.m., Heffington will perform a repertoire of Broadway tunes in the sanctuary of Christ Episcopal Church, located at 111 S. Church St., downtown Smithfield, as part of the church’s classical music program, Sundays at Four. This will be her second time performing in this venue, as she was previously featured as one of the church’s “Terrific Teen Talent” performers in 2016.

Her performance will include music from Broadway musicals such as “Yentl” and “Anastasia,” as well as some less-familiar show tunes. She will be accompanied by her pianist, Bart Kuebler.

Heffington attributes her interest in Broadway to her parents, both of whom were in the performing arts industry themselves.

“There was always this calling inside of me to sing, dance, act and make art but it wasn’t until I was about nine that I actually started to pursue it, and clearly, I never looked back,” Heffington said. “I grew up being saturated in all things music. Whether that was watching the classic movie musicals, plunking out songs on the piano with my mom or sitting through theory classes with my dad, it has always been a part of who I am.”

To facilitate her interest and commitment to the performing arts, Heffington’s parents homeschooled her.

“It was honestly the best option for me because it allowed me so much freedom in taking the opportunities that came in my career,” Heffington said. “I have always made my own path and possessed a large amount of independence, but the amount of drive and determination it takes to juggle an education and a career is insane.”

She added that being home-schooled and having to constantly travel to performance gigs meant doing her school work on a plane, in a car or even backstage at a rehearsal.

In addition to having performed at Christ Episcopal Church in the past, her local performance credits include most recently being seen as Belle in a regional theater production of “A Christmas Carol,” and as the lead in an immersive theater experience with the Virginia Stage Company. She has also performed with the Tidewater Opera Initiative, Busch Gardens, the Torggler Vocal Institute and the performing arts project “Blueprint,” and has starred in several short films being produced throughout Hampton Roads.

Once in New York City, Heffington plans to continue her studies with the professors and studios with which she has become associated, and to launch herself fully into auditioning and performing whenever and wherever she can. At the top of Heffington’s list of career goals is to originate a role in a musical, but other roles she said she would enjoy getting the chance to play include Mary Poppins or Jenna in “Waitress.”

This also means that she will not be attending a university right away.

“I thought about it, but I don’t feel college is where life is taking me at this point,” Heffington said. “I’ve spent the last year and a half traveling to NYC to accustom myself with the performing scene up there so I definitely feel more than ready to go and I’m excited to continue to take risks and challenge myself as an artist an person.”

Heffington has lived in Windsor for the past seven years, having moved with her parents from Virginia Beach. When asked if she will miss Windsor or the greater Hampton Roads area, she replied that while she will miss her family and being close to the beach, she has never been a small town and country person.

While Heffington was uncertain what other performances she would be part of this summer, her recital at Christ Episcopal Church will be her final solo performance in the area before leaving for New York City.

There is no ticket charge to see Heffington’s recital, but a free will offering will be taken to support Anna and future Sundays at Four concerts. More information on Sundays at Four can be found at www.sundaysatfour.org or by calling 675-5777.