The new building of the Boykins Baptist Church was opened for worship last Sunday, with an appropriate program, celebrating its initial occupancy, in the presence of a large congregation. Also, several other denominations of the town and community, and a number of other visitors, were present. After special music by the choir, Rev. A.C. Jordan, a former pastor of the Boykins Methodist Church, read from the 100th Psalm and offered fervent prayer for God’s blessing upon the new house and upon its pastor and people. 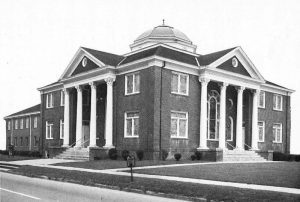 Boykins Baptist Church had its first formal worship service on Sunday, May 26, 1918. — Submitted

Earlier in the week, F.M. Powell and the pastor, Rev. H.P. Dalton, formally invited people of the community, of all denominations — and representatives from Churches of the Blackwater Baptist Association, to be in attendance. They asked that the building be used by God’s people for whatever worthy purpose that would suit their needs and purposes — at any and all times.

There were several responses by the attendees to Rev. Dalton’s timely and wholehearted welcome; and, although all varied in theme and content, comments from those assembled were happily blended into a harmonious expression of the community’s gratification. It was good to note the support and recognition given by the various other denominations and institutions represented there. They were witness to the fortunate consummation of the hopes, plans, and prayers of the pastor and his people. 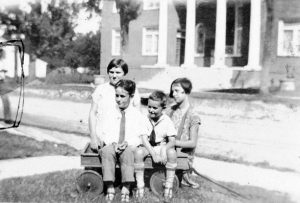 Rick Francis’ father, the late Gilbert Francis, as a child — the one with the necktie. The others are unidentified. Behind them is Boykins Baptist Church. — Submitted | Rick Francis

Responding to the Rev. Dalton’s welcome were: Mr. W.W. White, for the Town of Boykins; Hon. J.L. Barham, for the community; Rev. Porter Hardy, pastor of the Boykins M.E. Church, for the other denominations represented; Hon. R.E.L. Watkins, for the Blackwater Baptist Association; Paul Scarborough, for the Baptist denomination, in general; and Mr. J.W. Fleetwood, for the church membership.

At the close of Rev. Dalton’s remarks, Mr. Watkins presented him with a liberal check. It was in recognition and appreciation, from the members of the church, for Rev. Dalton’s splendid work in taking part in the actual construction of the new building.

The Church, which was opened under such auspicious surroundings, is easily one of the most handsome in the Blackwater Baptist Association; and, we believe, it is safe to say, that no town in Virginia of similar size has a building equaling it in appearance and equipment.

Outwardly, it presents two handsome pillared fronts, with four stately Corinthian columns on each. There are entrances on each front: from Main Street and from the side fronting towards the Seaboard Railroad Station. The building covers 65 by 65 feet at right angles with a half-circle extending in the rear.

The Church was built from plans drawn by J.E. Greene of Birmingham, Alabama, a specialist in Church architecture; however, the drawings were altered by Rev. Dalton to suit local needs. E.C. Smith of Franklin is the contractor.

This work is some of the best that this competent builder has ever had under his supervision. N.F. Gray, a local carpenter and a member of the Boykins Baptist Church, did most of the woodwork in the building; the concrete work is by Heck and Clark; and the plastering by W.E. Councill of Newport News.

The exterior is of red hydraulic brick, with stone trimmings. The pleasing effect of the handsome structure from without is more than matched by the beauty of the auditorium and the general plan of the body of the building.

The auditorium is formed by a right angle and wide semi-circle. The pulpit, with a baptistry in the rear, forms the apex of the angle. A choir loft is to the left of the pulpit. The ceiling is of metal with heavy beam designs converging over the pulpit. Handsome memorial windows center in each front.

There are 18 Sunday-School rooms, a roomy pastor’s study, and two robing rooms.

A commodious balcony adds to the seating capacity and provides two additional Sunday-School classrooms; and, on the first floor of the auditorium, under the balcony, disappearing folding partitions give four other classrooms. The pews on the main floor are of mahoganized birch, of massive construction, while opera chairs of the same wood are placed in the balcony and within the first floor recesses. Normal seating capacity is 500.

Illumination is furnished by a number of brascolite electric fixtures. The building is heated by an American vacuum steam system, installed at a cost of $1,800.

The building, as it stands completed, is a $20,000 structure — at last year’s prices; but, thanks to the pastor’s practical business ability and to the great amount of actual manual labor that he gave to the building, it represents to the congregation an expenditure of only $17,000. It is worth mentioning here that Rev. Dalton bought most of the material for the building and the furnishings, did practically all of the electric wiring and plumbing, and graded the church lot — along with many other incidental things.

The pastor is just beginning his fifth year with the Boykins people and, under his leadership, they are pressing forward to larger and more effective work in the future. He has their full confidence and, needless to add, they believe in him; and, they feel that it is largely due to his efforts that they occupy, today, the splendid church building which has been erected by the liberality, sacrifice, and harmonious co-operation of pastor and people.