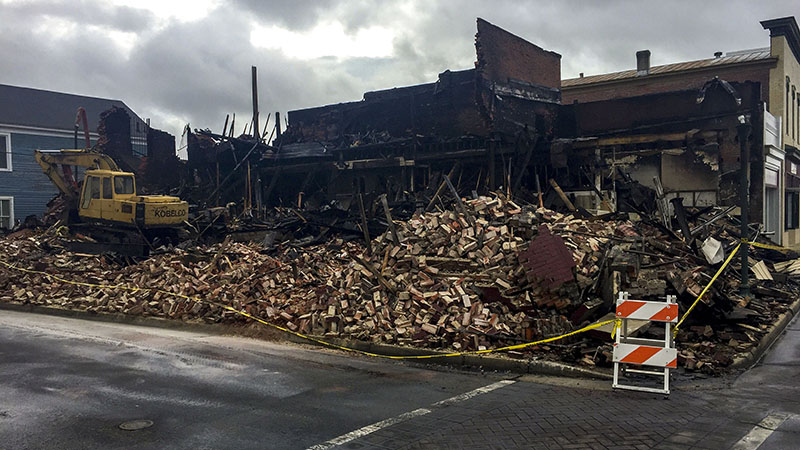 FRANKLIN
The owner of the property at 208 N. Main St. in downtown Franklin, which a suspected electrical fire destroyed on Thursday afternoon, does not currently plan to rebuild.

Carlton Cutchin, whose family has owned the Victorian-era storefront since the 1940s, cited federal and state flood zone building code requirements as his reason for not wanting to rebuild. According to Donald Goodwin, the City of Franklin’s director of community development, the Federal Emergency Management Agency’s (FEMA) National Flood Insurance Program mandates that new structures being built in flood zones, or renovations that exceed 50 percent of a structure’s value, must incorporate flood-proofing measures. 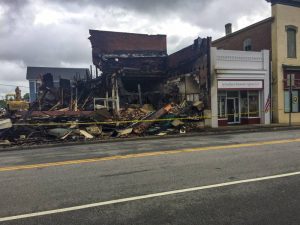 Though the fire was extinguished, the site remains roped off. Insurance investigators are expected to arrive on Saturday.

These can include: anchoring the building to resist rotation, collapse or lateral movement; installation of watertight enclosures for doors and windows; reinforcement of walls to withstand floodwater pressure and impact forces generated by floating debris; using membranes or sealants to reduce seepage of water through the walls; elevating the building’s electrical wiring above the flood elevation and using flood resistant materials such as masonry and Durock instead of sheet rock (drywall.)

“We have a map from FEMA that delineates the special flood hazard areas,” Goodwin said. “Because that map is not a topographical map, one spot on that map might be 15.5 feet above sea level and over here it might be 19.5 feet, so you need a surveyor. They will tell you what your finished floor elevation is. If the base flood elevation is 16 feet and your floor level is 14 feet, you could have two feet of water in your building.”

According to the City of Franklin’s geographic information system, nearly the entire downtown is located in a floodplain. Cutchin said the cost of implementing the required flood-proofing makes reconstruction of the site too expensive.

“I hate not being able to build back,” he said. “It takes away from the downtown and that section of Main Street.”

City Manager R. Randy Martin said that while the flood zone regulations may make the cost of rebuilding more expensive, they do not outright prohibit Cutchin from erecting a new structure on the lot. He added that one option for rebuilding would be to elevate a new structure above the floodplain by building a tall foundation and stairs leading from the sidewalk up to the first story. Goodwin confirmed that the higher someone builds a foundation, the fewer flood-proofing measures would be required.

Cutchin learned of the fire around the same time it was first reported to the city’s Fire Department, which, according to Fire Capt. Tim Dunn, was around 2:22 p.m.

Volunteers from Hunterdale and even as far away as Boykins came to assist. Crews were still combatting the flames as late as 4:45 p.m.

Dunn confirmed that there had been no injuries sustained by any occupants in the building or the firefighters. He added that while the cause is suspected to be electrical in nature, this was unable to be confirmed.

“Nobody got hurt, that’s the most important thing,” Cutchin said. “Franklin Fire Department did a fantastic job saving the rest of the buildings, because it could have been bad.”

He added that the building was insured and that estimators were scheduled to arrive on Saturday to come up with a dollar amount for the damage. The cost to clean up the rubble should also be covered by insurance.

The building, which dates back to the late 1890s, had most recently been the site of Trinkettes & Treasures, a furniture store. According to Cutchin, the storefront started as Woolworth’s and later became Roses 5 and 10. Later, it became the Standard Drug Company, next MedCo Drug and then three to four different independently-owned businesses.

The owners of Trinkettes & Treasures were unable to be reached for comments by press time. Cutchin said that if he cannot rebuild, the site would likely become either a park or a parking lot.