FRANKLIN
The Western Tidewater Tennis Association ran a USTA sanctioned Junior (L7) Tennis Tournament for kids age 16 and under in Franklin on May 12. 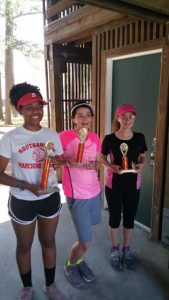 Top finishers in the girl’s tournament were all from the local area. From left are champion Morgan Williams, second place Ella Brady and third place Emma Brady. — Submitted | Sheryl Raulston

We had 12 juniors playing, with many from Franklin area and some coming from Suffolk and Chesapeake to play. Tennis Pro Ken Cussick ran the round robin tournament, with 31 matches played on the Cypress Cove Country Club clay courts.

A pizza party was held for the kids.

The tournament was split into boys 16 and under and girls 16 and under. In the boy’s tournament, the champion was Samuel van de Graff. Second place went to Kyle Clemente, and third place to Bryce Marchetti. All three boys were from the Chesapeake area. Fourth place finisher was Cooper Trapkin, and fifth place was his brother, Griffin Trapkin, from Suffolk.

In the girl’s tournament, the champion was Morgan Williams, who plays for Southampton High School. Second place went to Ella Brady, and third place to her sister, Emma Brady, from Franklin.