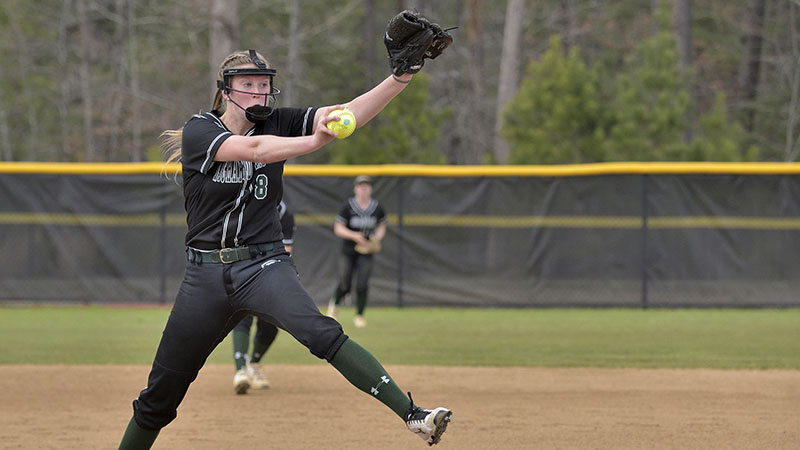 Megan Vincent, a 2017 graduate of Southampton Academy, plays softball for Richard Bland College. She was recently named to the All-Region 10 Second Team as a pitcher, and also had made All-Tournament.

PETERSBURG
Megan Vincent of Boykins finds her happy place on a pitcher’s mound or, for that matter, anywhere else on a softball field.

“Softball has always been something to which to escape,” she said. “It’s a stress reliever. My mind is at ease. There’s nothing better to do than play ball.”

Her love of of the game has gone beyond youth rec leagues, travel ball and high school to playing for the team at Richard Bland College 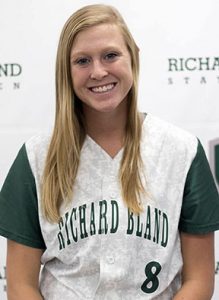 That dedication to the game has also rewarded her with a recognition. The freshman at Richard Bland College in Petersburg was recently named by the school as one of four players placed on the 2018 All-Region 10 Softball Team.

This took place during the NJCAA Division II, Region 10, District F Championship. Vincent was, according to the press release from the college, voted to the Second Team as a pitcher.

“A right-hander, she was 10-7 with a 2.35 earned run average and 86 strikeouts over 110.1 innings with seven complete games and three shutouts in 26 appearances, including 16 starts and three saves. Megan led the pitching staff in ERA, innings, complete games, shutouts, appearances and saves, while tied for wins and strikeouts.”

To get to this distinction was by no means a given. She’s worked toward it since her childhood.

“Nothing was ever given me. I’ve had to overcome some injuries I have had along the way,” Vincent said. “I’m proud and happy I got that award.”

Adding that she had also made all-tournament, Vincent gave some background as to how she came to this point.

“I started playing at 9 years old for a rec league in Newsoms. I was raised in Boykins,” Vincent said. “Fun times. I also played on a travel ball team around 11 or 12. That team was Southampton Storm. In my junior and senior years, I won first team all-state and all that good stuff.”

The first year on the high school level were done at Southampton High School. In her sophomore year, Vincent transferred to nearby Southampton Academy and made it to the Lady Raiders team. During her senior year, she publicly signed to play at RBC.

The college won her over, Vincent said, because “I liked how it was a small campus. Something felt like home. It’s nice. I really came here because I potentially want to play at a bigger school after I finish here.”

She’s working on earning an associate degree in science, and is “pretty sure” that sports medicine will be her career choice, but a decision has not been made yet.

Meanwhile, Vincent has the familiar challenge of playing softball and her studies.

“The toughest part is making time. Managing my time. It’s my biggest struggle,” she said, adding that she finished the school year with a 3.5 GPA.

Through it all, Vincent has had the support of her family. Parents Ronnie and Jennifer Vincent and brothers, Chris and Jeffrey, the latter two who played baseball at the high school level.

“My dad was a coach for a time. He helped shape me to become the player I am today,” Vincent said. “I would not be here if it wasn’t for my parents.”

She foresees the likelihood continuing to play after college.

“Probably. Because I love playing the game,” Vincent said. “I want to thank all of my coaches and athletic trainers that have helped me, and my strengthening coach.”

She also sings the praises of her fellow Lady Statesmen.

“I’ve realized you can only go as far as your team,” said Vincent. “You develop the best relationships and make lifetime friends. You’ll always remember them.”