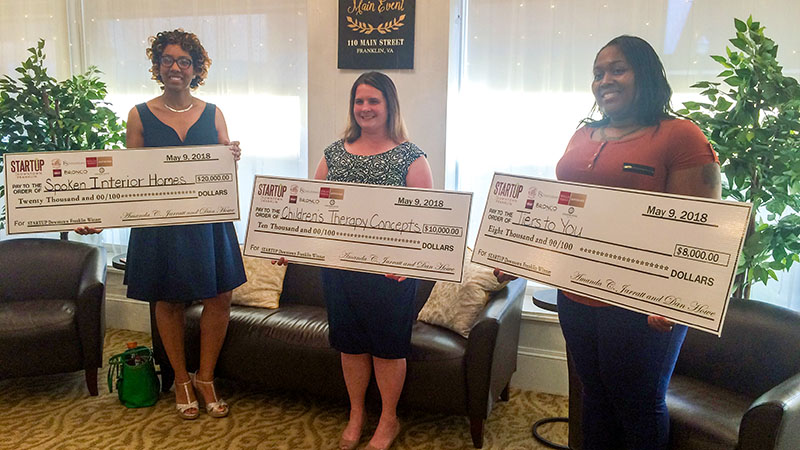 The newest STARTUP winners are, from left, Katrina Manley of Spoken Interior Homes’ Kim Mallon of Children’s Therapy Concepts; and Andrea Epps of Tiers to You. They were presented checks on Wednesday evening downtown in Main Event. -- Stephen H. Cowles | Tidewater News

FRANKLIN
What do an interior designer, child therapist and baker have in common with Franklin?

They are to be the next new businesswomen in downtown this year, thanks to the four judges of the STARTUP program. The presentation of checks to help them establish their businesses was made public during a reception and brief ceremony on Wednesday evening in Main Event. That meeting space, by the way, was established last year by one of the first three recipients of the campaign to enhance the district.

Katrina Manley of Spoken Interior Homes is the recipient of the $20,000 check. Her path to downtown began in a roundabout way at Virginia Commonwealth University.

“Originally I went to school for fashion design. At VCU we shared a space with the interior design department,” said Manley. Halfway through her studies she realized fashion really wasn’t for her, but changing majors was not an option at that point.

“I started taking a liking to their major a little more than mine. I found I liked dressing the home rather than actual people.”

The daughter of Darius Smith of Suffolk and Janis Grayer of Hampton, she credits the latter for her interest and interior design abilities.

“I definitely get my creativity from my mom,” said Manley, who recalled watching her take off cabinets and paint them herself for the new house on the Lower Peninsula. Grayer also handled getting new furniture, curtains, etc., all on her own.

After graduation, Manley became a merchandising manager for Belk, and then for three years was the lead designer for La-Z-Boy in Newport News.

Other design experience came through helping friends decorate their first apartments or homes. They told other people who became clients.

A native of Murfreesboro, North Carolina, Manley has been a resident of Franklin for eight years. She said serious planning about opening her own place began around February of last year.

“I started thinking about a showroom and how that could happen,” Manley added.

Then along comes the STARTUP program, which is making that thought a reality. The money that she and the two other winners were awarded does not immediately go to them. Instead, the funds are distributed as reimbursements for setting up their respective businesses.

Negotiations for a space begin Monday, she said. Manley is looking at either the former paint store or embroidery shop, both on Main Street.

She is hoping to settle in by July, well ahead of the September deadline. The money must be spent by December, according to Amanda Jarratt, president of the Franklin-Southampton Economic Development Inc., which is one of the two organizations that launched and have supported STARTUP. The other is the Downtown Franklin Association, led by Dan Howe, executive director.

Kim Mallon won the $10,000 check for her business, Children’s Therapy Concepts LLC, which has actually been in business for a year, albeit quite mobile. She and her staff travel all over Eastern Virginia, which includes not only Western Tidewater, Portsmouth and Virginia Beach, but also as far away as South Boston, South Hill, Petersburg and Fort Lee. This money will enable the therapists to have a central office, which she would like to be on Second Avenue.

“We provide pediatric physical, speech and occupational services to newborns to 18 years old,” said Mallon, a physical therapist of the group.

“We live in Courtland, and feel there’s a great need for these type of services. There are no other pediatric providers in a 30-mile radius,” she said, noting that getting to such therapy for children can be “a hardship for families … the travel and expense. We’re a mid-point.”

When the Western Virginia native began her business a year ago, she was on her own, traveling from client to client. Now there are 17 on staff total.

Mallon earned both bachelor and doctorate degrees from East Tennessee University, adding that she was in the first class there to earn such accreditation in physical therapy. A therapist for 11 years, she has worked at three years for the Children’s Hospital of the King’s Daughters, followed by five year at another company.

Her motivation to becoming a physical therapist goes as far back her childhood. At 12, Mallon was in an automobile accident so severe that doctors told her parents she would experience memory problems, wouldn’t graduate or be able to drive, etc.

A broken arm caused by the ordeal required physical therapy. That person, Kathy Steward, assured Mallon she would come out of it all OK.

In addition to her work, her own family includes husband Denny Mallon and their children, Kyllian and Kayleigh.

“I really appreciate all the support we’ve gotten from the community, parents and staff,” Mallon said, thanking them for taking “a leap of faith” to come work with her for children’s sakes.

Andrea Epps was the “very happy” recipient of an $8,000 check for her bakery, Tiers to You. The name, interestingly enough was inspired by a song she likes, “Cheers 2 U.” All the more appropriate because Epps specializes in cakes for weddings, always happy events.

“I was very excited,” said the Franklin resident, adding that she was “even more elated” after winning the third, but unannounced prize. Jarratt said that originally there was not enough money for a third $10,000 check. But the people who taught the required business classes donated their fees, which enabled the additional award.

“Everything I envisioned is about to come into place,” said Epps. “I’ve been baking for probably about 10-plus years, ever since high school.”

That’s when she took up food service classes, and after graduation completed a two-year curriculum at Johnson and Wales University. Afterward, she worked a bit.

“I just wanted to go back into the baking and cake decorating, and decided to do it myself,” Epps said, who wants to be on Main Street. “I have always wanted to have my own business.”

She quickly acknowledged that her mother, Linda Epps, helps her with the craftwork and ideas. The senior Epps and her husband, Rufus Epps Jr., also live in Franklin.

The baker also credited her paternal grandmother, the late Virginia Epps, for her baking and cooking abilities.

“A lot of what I do does come from her side. She loved to bake as well and inspired me,” said Epps.

While baking cakes might seem simple enough, her experience has proven otherwise.

“It seems like it could be simple. I think a lot of people misjudge the amount of time and tediousness. There’s a lot of hard work. I put in a lot of time,” she said.

Although vanilla and almond flavors are most popular with her customers, there’s also been a lot of variety, and Epps hopes to offer different suggestions to customers.

“I like to introduce people to those different ideas. I’m really hoping to bring people’s ideas to life in cake form,” she said.

Before you ask, she already does cupcakes, but hasn’t decided what else her bakery will provide. Maybe brownies, cookies and macaroons.

Before the presentation, Jarratt said there were originally 21 applicants, but that was later winnowed to nine. Those candidates had to take the aforementioned business courses as well as present their plans to the panel of four judges.

As mentioned, the money is not awarded directly, but goes to reimbursements for needed utilities, supplies and equipment, etc. Everyone must be in a site by Sept. 30, and the money spent by year’s end.