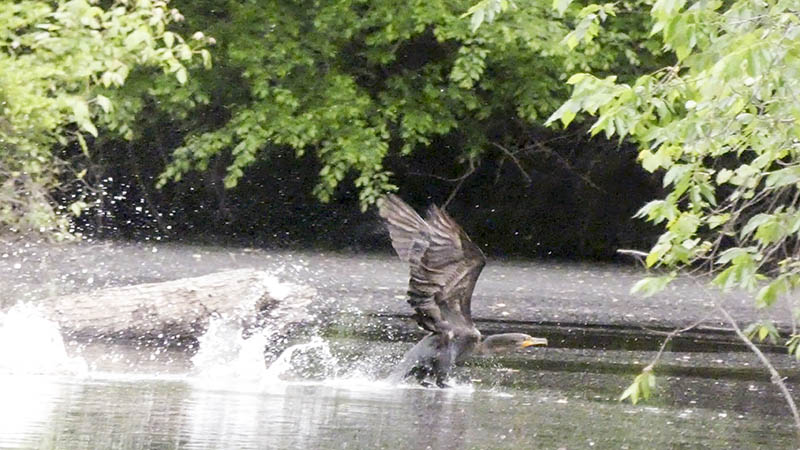 The RiverGuard spotted this cormorant having a tough time taking off from the Blackwater River. -- Submitted | Jeff Turner

Spirit of Moonpie and I spent the 7th through the 9th on the Blackwater above Joyner’s Bridge. The water was normal, clear and 68 degrees. Air temps ranged from 48 to 72. It was very nice weather despite the threat of rain the first two days.

Trash on this patrol was normal for that part of the river, none upriver of the bridge, a lot downriver from the bridge. Most of it was old trash like glass bottles. I mean, I even picked up a two-liter glass soda pop bottle! That’s some heavy glass, my friend, trying to pick that up with a litter-getter.

On the Moonpie Critter Patrol we saw a large adult bald eagle, a bunch of blue herons, a muskrat and a cormorant which seemed to have a really difficult time getting air born off of the water. I don’t think I have ever seen one have to run across the water so far to get going.

The fishing on this trip was FANTASTIC! I caught 15 bass ranging from 8 ounces to 3 pounds. All were caught on a chartreuse broken back Rapala. Several of the fish were caught right on shore. The bass are starting to bed and it takes some patience to coax them into a strike when they are spawning. The trick is you have to let that lure stay in the nest and make it busy as long as you can. That’s hard to do and not move the lure out of the nest. The name of the game is wiggle and waggle that lure without making it leave the bed. It also may take several times to hook up. Many times the bass will just sorta move the intruder lure out of the nest without striking. That’s why I like to use a brightly colored lure so it will really get them mad enough to force the hit.

So as nice as this trip was it didn’t start off so great. First, after getting the boat ready to launch (I thought,) I backed the boat into the water and even though that ramp at Joyner’s Bridge is really flat and usually difficult for me to launch, this time I just could not get the boat off of the trailer. I was pushing and straining and bout to pass out when I heard Moonpie snickering and making some kind of snide remarks.

Moonpie looked at me and said, “Dude, I reckon you have launched that boat 1,000 times in your lifetime, you would think by now you would know it will not come off the trailer with the strap still on.”

Getting madder by the moment, I turned to see if she was playing me, and sure enough, I had left the strap on. “Mush brains,” I yelled at myself. “I have mush brains.” Moonpie agreed. But this was not all my friends. When I got to base camp, because of the threat of rain, I figured I better look and see if NOAA had done a weather update yet or not so I could make better decisions of how to set up camp. MUSH BRAINS AGAIN, I discovered I had left my cell phone at home. So that put me in a real predicament.

At first I decided, “Well, I will just go old school like I used to do, no phone.” That decision lasted about two minutes as I realized a problem with having cell phones these days. That problem is people expect you to check in, and if you don’t then they get worried and send in the Marines. Plus, I really don’t need to be out there without a way to call for help with all the problems I have and as dangerous as it is for me doing what I do out there. So I decided I might as well suck it up and go back to the boat landing, load the boat, go all the way home, then trailer the boat all the way back to the river and launch again and, hopefully, not forget the strap again! So that’s what I did and it really only knocked off about and hour and change off of my day.

Well, I reckon as I get older y’all gonna be hearing more and more mush brain stories like this from me on the two rivers we call the Blackwater and Nottoway.