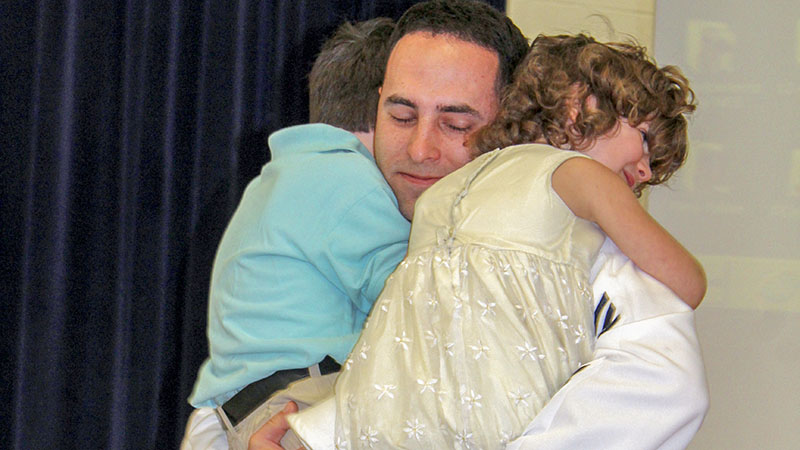 Justin Carson embraces his children, Elijah and Scarlett, in Nottoway Elementary School. Principal Susan Melbye arranged for the reunion during lunch on Monday. Carson had been deployed overseas on the USS Monterey for just shy of seven months. -- Stephen H. Cowles | The Tidewater News

SEDLEY
Lunchtime on Monday was extra special for Elijah Carson. The kindergartener just didn’t know that when he walked into the cafetorium with his classmates.

The 6-year-old was first surprised to see waiting for him his mother, Cassandra, with his sister, Scarlett, 5, and a family friend, Kayle Rivers, all of Sedley. They sat together eating and talking until Principal Susan Melbye called for everyone’s attention. She pointed to the screen set up at the stage and played a video recorded message.

From where he sat, Elijah could make out an outline of a person. 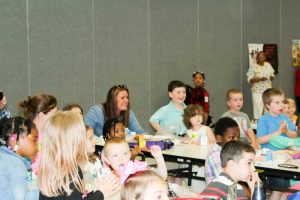 Elijah Carson, center, recognizes his father, who appeared from behind a curtain across the room. His sister, Scarlett is seated next to him. Behind them is their mother, Cassandra.

“Is that daddy,” he asked aloud.

Sure enough, the visual became clear and message was indeed from Elijah and Scarlett’s father, Justin, who was on the USS Monterey somewhere in the Mediterranean Sea. He had been away just shy of seven months.

Less than a minute later, the recording ended. Then Melbye announced that there was just one thing more.

On cue, Justin walked from behind the screen, much to everyone’s happy surprise.

Elijah and Scarlett ran to and were embraced by their father, who held them in his arms for several minutes. Eventually, they made their way to the table, where the trio continued to hold one another and talk. Elijah got to wear his father’s cap and would bounce around with glee.

Carson, 34, is an E-6 in the Navy, and serves as a welder (HT-1 – hull maintenance technician.) Talking before his surprise appearance, the Michigan native said he’s been in service for 10 years. Previously, he had been a contractor worker for Ford.

Carson said he got tired of moving around and the layoffs, so he talked to a recruiter.

The serviceman expects that he’ll be based in Norfolk for six or seven more years before the possibility of deployment.

He was quite pleased when Melbye told him how well Elijah has been doing in classes, and making top marks in PALs testing.

Before the Navy man’s arrival at the school, the principal explained how all was arranged. She was informed via Elijah’s teacher, Rebecca Johnson, who learned from Cassandra when Carson was due back home.

Johnson then told Melbye, who consulted with other principals for ideas of how to make the reunion so memorable. Bringing him in as a substitute teacher or even on a fire engine were considered as spectacular entrances.

With help from the boy’s mother and family friend, the recording and big reveal were chosen and prepared. Then it was just a matter of time before the arrival.

Cassandra confirmed that the planning began around three months ago.

“Mrs. Melbye put everything together,” she said, and also praised Johnson as “a godsend.”