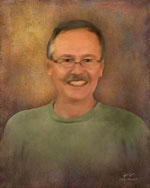 Steve was born on Aug. 10, 1957, to the late Napoleon Bonaparte Burlas Jr. and Cleo Brinkley Lawson in Norfolk, Virginia.

He grew up in Virginia Beach, Virginia, and graduated from Cox High School in 1976. Steve attended Norfolk State, where he played football for two years. Steve was a long-distance truck driver and enjoyed traveling. He loved life and his family, especially his granddaughter “Lizzy.”

Steve was an avid Dallas Cowboys fan, and will be deeply missed by all who knew him.

The family will receive friends on Friday, May 4, from 7 until 8:30 p.m., in Garrett-Sykes Funeral Service, Ahoskie, North Carolina.

The celebration of life service will be on Saturday, May 5, at 11 a.m., in the Garrett-Sykes Funeral Service, Ahoskie Chapel, with the Rev. Greg Hurdle officiating.

In lieu of flowers, donations may be given directly to the Burlas family or online at www.tmcfunding.com/search-fundraisers/campaign/2309?layout=single.

Garrett-Sykes Funeral Service, Ahoskie Chapel, is handling the arrangements for the Burlas family, and online condolences can be directed to the family by visiting www.garrettsykesfs.com.