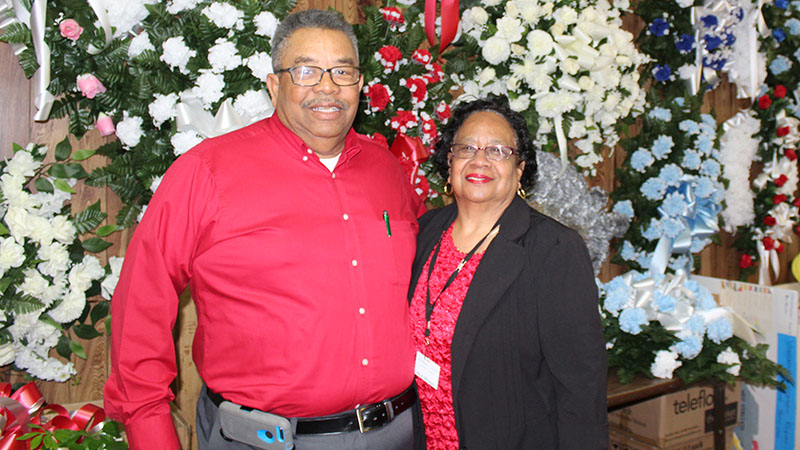 COURTLAND
For Charlie and Ida Williams, the years have unfolded like the flowers they have professionally arranged and delivered for 33 years. Charlie recalled that May 1 is the anniversary when he opened his first shop on South and Broad streets in Franklin.

Drafted after graduating from Riverview High School, Charlie did his patriotic duty. Following that, he found employment at Union Camp, which is where he worked for 16 years until back problems developed.

At the time he was married; Ida was a teacher’s aide, and had heard of a colleague bragging about her uncle, Wilber Bland, who had a florist’s shop in Petersburg. After introductions, he became an inspiration for Charlie, who had already seen a need for a black-owned florist.

“He told me to go for it,” said Charlie. “We became friends — like brothers.”

He added that another positive influence in the early years was Stafford Brady, who was “like a dad. He was very inspirational.

The couple opened the shop in the city and worked there for several year until moving just before the flood of 1999. They settled at the Shands Center in Courtland, where they have been since.

While Charlie primarily handles the business side, the creative aspect is found in Ida, who does much of the arranging for customer’s orders.

“She has a talent,” said Charlie of her abilities. “A God-given gift.”

They’ve also gotten help from their daughter, Vicky Jordan of Capron (“A very good designer,” they said.) One of the grandsons has been a young apprentice.

To expand his knowledge of the business, the Williams periodically learn by attending workshops and floral shows.

“I pick up ideas and up-to-date designs,” he added.

The floral industry has changed over the decades, Charlie pointed out. Most notably, having to compete with grocery stores that have their own florists. The ability to buy flowers either retail or wholesale via online has also had an impact. Via an auction, the Williams can purchase what they need from as far away as Central or South America and have them in hand within a couple of days.

He advises customers they would be better off financially to order directly from the shop because local orders will still come through him.

“We do what we can to satisfy our customers,” said Charlie, who looks forward to several more years of serving them.

Find out for yourself what the Williams’ can offer. Call 653-2042, visit www.williamsfloristofva.com, or stop by the shop at the Shands Center, 22704 Main St.